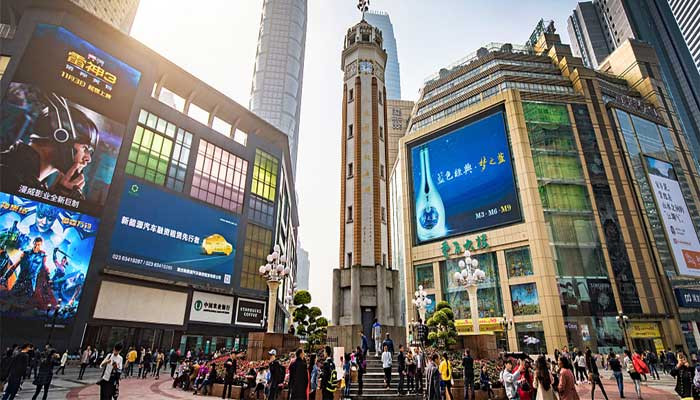 LAHORE: While China has already overtaken the United States in terms of national net worth to take the top spot in the world, thanks to a scorching real estate market that has driven property values ​​up, the size of the economy of this communist nation is also expected to overtake that of America by 2033.

“The Nikkei,” the world’s largest financial newspaper with a daily circulation of over three million, writes: “China’s net worth reached $ 120 trillion in 2020 to exceed US $ 89 trillion. United as a boiling real estate market drove property values ​​up, according to a report by the McKinsey Global Institute. The McKinsey report covered 10 countries that account for 60% of global revenues. “

The Tokyo-based publication adds, “The group’s total net worth has tripled from 2,000 to $ 510 trillion. China’s net wealth – the value of total assets minus liabilities – has increased 17-fold from $ 7 trillion two decades earlier. The country accounted for 23% of the total in 2020, while the United States’ share was 17%, followed by Japan, which accounted for 7%, at $ 35 trillion.

Remember, the Japan Center for Economic Research predicted a year ago that China would eclipse the US economy by 2029. Likewise, on December 26, 2020, the “BBC News” claimed, “China will overtake the United States to become the largest economy by 2028, five years ahead of schedule, according to a report. The UK-based Center for Economics and Business Research (CEBR) said China’s “skillful” handling of Covid-19 would boost its relative growth compared to the US and Europe in the years future. Although China was the first country affected by Covid-19, it has brought the disease under control with swift and extremely strict action, meaning it has not needed to repeat economically crippling blockages like made European countries. As a result, unlike other large economies, it avoided an economic recession in 2020 and is in fact expected to grow 2% this year. “

However, a New York-based US newspaper “The Wall Street Journal” said, “China is experiencing a slow-moving economic crisis that could undermine the stability of the current regime and have serious negative consequences for the global economy. The United States and its allies have many tools to influence the Chinese economy and must weigh the consequences of an acute crisis against the threat its current trajectory poses to American policymakers. the rapid growth and stability of the Chinese economy will continue.

With a circulation of around 2.834 million copies (including nearly 1,829,000 digital sales) in August 2019, this leading American news house added: “In December, real estate developers China Evergrande and Kaisa joined several other over-indebted companies went bankrupt, exposing hundreds of billions of yuan and dollar-denominated debt in default. Real estate makes up about 30% of the Chinese economy, almost double the levels that led to the 2008-09 financial crisis in the United States, Spain and England.

With a population of over 1.4 billion, China spans five geographic time zones and borders 14 different countries, the second largest country in the world after Russia.

According to the Chinese Ministry of Industry and Information Technology, from 2012 to 2020, China’s industrial added value increased from 20.9 trillion yuan ($ 3.24 trillion) to 31.3 trillion. yuan, whose manufacturing value added rose from 16.98 trillion yuan to 26.6 trillion. trillion yuan.

In 2020, China exported approximately US $ 2.6 trillion in goods, making it the world’s largest exporter.

On October 29, 2021, “Al-Jazeera Television” reported: “Once hailed by the Communist Party as having defeated its opponents of the past with only ‘millet plus guns’, the People’s Liberation Army has now become the most the world’s great fighting force, with more than two million active people. Their air force has also grown to be the largest in the Asia-Pacific region and the third largest in the world, with more than 2,500 planes and around 2,000 fighter jets, according to an annual report from the Office of the Secretary of Defense. published last year. . “

The latest “Pentagon and China Military Power Report” reads: “In its ranks there are more than 915,000 active duty soldiers in its ranks, eclipsing the United States, which numbers approximately 486 000 active soldiers. “

According to the Stockholm International Peace Research Institute, China’s arms exports have mostly gone to Pakistan, Bangladesh and Algeria over the past decade.

The Swedish institution added: “During the same period, China has also been one of the world’s leading exporters of armed unmanned aerial vehicles (UAVs), commonly referred to as drones, with customers including the United Arab Emirates. and Saudi Arabia.

In addition, China also has the second largest defense budget. According to a report by “Al-Jazeera Television”, for fiscal year 2021, 1.36 trillion yuan (about $ 209.16 billion) was allocated to defense, 6.8% more than the year. last. China’s defense budget was $ 252 billion in 2020, according to the Stockholm International Peace Research Institute.

China has become a central player in drafting international rules for emerging technologies, especially fifth-generation wireless, as part of a national effort to shape the playing field in its favor.

In April 2020, China had overtaken the United States to dominate the world in international patent applications for the first time, while telecommunications giant Huawei Technologies topped the list of companies for the third year in a row, revealed the World Intellectual Property Organization in Geneva.

On February 25, 2021, the world-renowned German company specializing in market and consumer data, MM. Statista, had revealed: “In 2019, there were around 13 million 5G mobile subscriptions worldwide, which are expected to reach nearly two billion by 2024. Among all the countries in the world, China is expected to lead the way in in terms of the number of 5G connections over the next five years, where market revenues will grow from 0.6 trillion yuan to over six trillion yuan in this decade. “

In September 2021, China’s Ministry of Industry and Information Technology said, “China has built more than one million 5G base stations, representing more than 70% of the global total, and users of 5G terminals in China have exceeded 400 million which consist of the world’s largest user group.

Since 2010, China has increased its economic aid and investments in Afghanistan, notably with the announcement by the Metallurgical Corporation of China of a $ 3.5 billion commitment to develop the Aynak copper mines. Since then, China has been mining copper outside of Kabul.

A prominent Energy Post website, which mainly deals with the European and international energy sector, reports that China has lent $ 240 million in aid and pledged a similar amount over the next four years between 2012 and 2013.

As of September 2021, China pledged some 200 million yuan ($ 31 million, £ 22 million) in aid to Afghanistan, including food supplies and coronavirus vaccines.

According to an October 13, 2021 report from the Washington Institute for Near East Policy, China is not a newcomer to the Afghan-Pakistani region. It shares a 57 mile long border with Afghanistan.

This prestigious US policy think tank says, “To date, China has invested around US $ 60 billion in companies linked to CPEC. – an outlet on the Arabian Sea and the Indian Ocean. Thus, securing its assets in Pakistan is of critical interest to China.