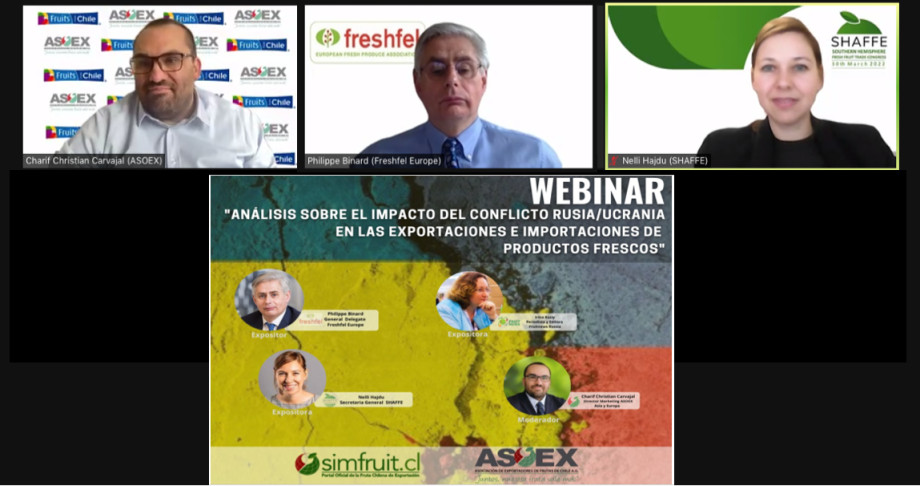 A webinar analyzes the impact of the conflict in Ukraine

growers and exporters from around the world came together for an online webinar to analyze the impact of the Russian-Ukrainian conflict last week. The event was organized by Asoex, Freshfel Europe, Southern Hemisphere for Fresh Fruit Exporters (SHAFFE) and Simfruit.

Nelli Hajdu, general secretary of SHAFFE, said exporters in the southern hemisphere face an uncertain situation as Russia is an important market for apples, pears and citrus fruits, which account for 80% of shipments from the country SHAFFE .

She said “difficult decisions” needed to be made on what to do with the fruit that cannot be sent to Russia, while disruptions to shipping services raise more concerns.

“Added to all of this is the rising container prices we are already seeing, as well as port congestion. In short, it is very difficult to know how the season will develop, it is a survival season, as many are looking for a way to continue producing and others to sell their products,” added Hajdu.

Philippe Binard, General Delegate of Freshfel Europe, said European exporters had faced similar situations in the past. He pointed to the sudden closure in 2014 of the Russian market, which was then the main destination for European fruit and vegetables, absorbing around 2.2 million tonnes per year.

“Therefore, adapting to the consequences that this conflict may have is nothing new for us. After the Russian embargo in 2014 came the economic embargo on Algeria, then last January of this year came the embargo on Belarus, affecting 600,000 tons, and now with Ukraine, 200,000 tons additional are affected,” Binard said.

Binard noted that the situation is further complicated by increased input and logistics costs resulting from Covid.

“What this new conflict adds is the impact on production and exports of the expected shortage of fertilizers and wood for pallets, products that come mainly from Russia and Ukraine. If a pallet used to cost €8, today it costs €15, i.e. it is becoming more and more expensive to produce and export,” he said.

Asoex’s Marketing Director for Europe and Asia, Charif Christian Carvajal, who hosted the event, said costs have increased by 10-15% overall. He pointed out that at the same time, the purchasing power of consumers has decreased due to inflation.

“That is why, as SHAFFE, we have formed a global coalition of fresh produce trade associations to jointly address the cost increases that are impacting the industry, particularly in logistics and supplies” , did he declare.

Europe will not be able to absorb everything

Binard noted that Europe does not have the capacity to absorb an additional 9.5 million tonnes of products originally destined for Russia, Ukraine and Belarus. “We are in a time when everyone has to be very responsible for where their products go and how they will be redistributed in the global market,” he said.

Regarding apples, he said European stock levels are hovering around 3 million tonnes, while last season they fluctuated between 2.6 million and 2.7 million tonnes, “so we have 300,000 tons more for sale”.

“In the second part of the season, a lot of apples are sent to Belarus and Ukraine, but not today. Perhaps an alternative could be Egypt, but there is a situation with its import system that hampers the ability of importers,” Binard noted.

Exports from the southern hemisphere to the conflict zone

According to Hajdu, Ukraine imported $795 million worth of fresh fruit in 2020, with the main suppliers being Turkey (citrus), Ecuador and Costa Rica (bananas and pineapple), which together accounted for 48% of all fresh fruit imports that year.

In Russia, meanwhile, fresh fruit exports from SHAFFE member countries totaled 643,084 tonnes in 2020, the bulk of which was apples, pears and citrus fruits.

South Africa and Argentina are the main suppliers, concentrating 69% of exports from SHAFFE countries to this market.

What will happen in Russia?

Regarding the current situation of the Russian market, Irina Koziy, editor-in-chief of Fruitnews Russiasaid it was difficult to predict what might happen if the conflict escalates.

“There is already a massive depreciation of the ruble against world currencies, Russian importers are facing the requirement of prepayment before the start of any shipment and the inability to make payments through Russian banks, shipping lines and many exporters are refusing to pay,” she said. noted.

Koziy added that the banks were withdrawing their decisions to give loans to agricultural producers to carry out spring works, and that the Central Bank was offering loans at a “frightening” interest rate of 20%.

“For ordinary buyers of fruits and vegetables, the most favorable scenario would be a 50-100% increase in ruble prices given the fluctuation in the ruble exchange rate and more complicated logistics,” he said. she declared.

Giving an overview of trade in Russia, Carvajal said: “Fruit distribution in the Russian market is quite concentrated in the central region, with Moscow absorbing around 30% of total imports”.

In the specific case of Chile, Carvajal explained that Chilean shipments to the Russian market have been showing a downward trend for a few seasons now. In 2020/21 shipments totaled just over 50,000 tonnes, while in 2017/18 Chile exported 80,000 tonnes of fruit to Russia.