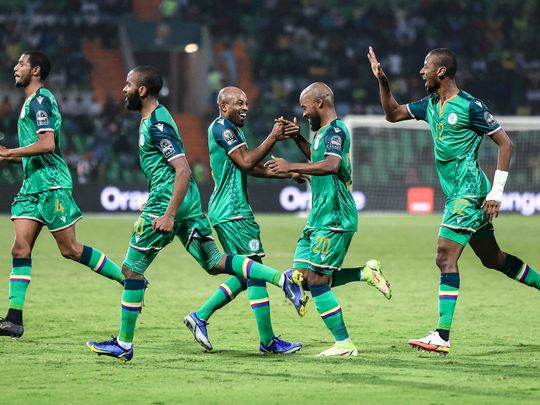 Four-time defending champions Ghana were knocked out of the Africa Cup of Nations on Tuesday in a stunning upset, while Morocco and Senegal won their respective groups but did not save their status as pre-tournament favourites.

Just two days after Equatorial Guinea shook up the tournament by beating defending champions Algeria, equally tiny Comoros humiliated Ghana with a 3-2 victory in their Group C clash in Garoua in the one of the biggest surprises of the competition to date.

The small island archipelago in the Indian Ocean makes its Nations Cup debut and not only scored its first goal of the tournament, but also its first win in a stunning result.

They could even sneak into the last 16 as one of the top four third after condemning last-place Ghana, but will have to wait for the outcome of the final group games.

Ghana captain Dede Ayew was sent off early in the game but goals from Richmond Boakye and Alexander Djiku leveled the tie as they fought back, only for Comoros’ Mogni to clinch the winner five minutes from time .

Morocco won the group after coming from behind twice to draw 2-2 against an understaffed Gabon, which had eight payers with COVID-19 infections and captain Pierre-Emerick Aubameyang sent back to his club to England for further medical testing after detection. post-viral heart damage.

Gabon will be hoping they will be cleared to return for Sunday’s opener of the Round of 16 where they face Burkina Faso in Limbe.

Senegal finished top of Group B earlier on Tuesday, ahead of Guinea, but that was after yet another unconvincing performance despite the return from Covid-19 quarantine of captain Kalidou Koulibaly and goalkeeper Edouard Mendy.

They were lucky not to concede a penalty in an unappreciated 0-0 draw against Malawi on Tuesday and have still scored just one goal – a penalty in Sadio Mane’s stoppage time – after three games.

Malawi were furious when Cameroonian referee Blaise Ngwa canceled a late penalty he originally awarded them in Bafoussam, after Gomezgani Chirwa was brought down in the box by defender Bouna Sarr.

The decision was overturned in review, but Senegal can count themselves lucky as there was both a shirt swipe and a contact.

Malawi President Lazarus Chakwera had offered each of those who played against Senegal a payment of 1 million Kwacha ($1,223) if the team qualified for the second round, which they seem almost certain to do despite finishing third in the group.