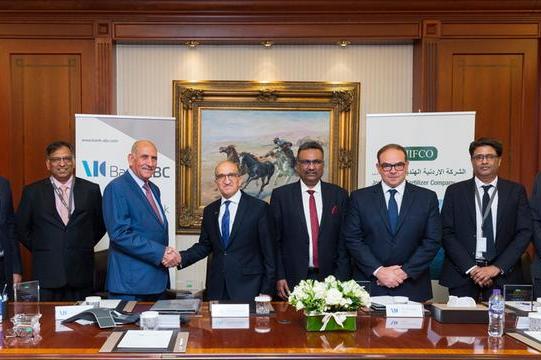 Bank ABC offers a full range of banking services to JIFCO, an important new customer for Bank ABC Jordan and the Group. JIFCO, Jordan’s largest producer of phosphoric acid with an annual production capacity of 475,000 metric tons, is a successful collaboration between Jordan and India.

The transaction represents a strong alignment of the interests of JIFCO shareholders to support the company through contractual arrangements for raw material supply and volume offtake.

Commenting on the transaction, Bank ABC Group Deputy Managing Director, Mr. Sael Al Waary, said: “Bank ABC is delighted to have been appointed as the sole Mandated Lead Arranger (MLA) of this loan facility for JIFCO. We are keen to support the company’s growth and expansion efforts with this tailored financing facility. This important transaction demonstrates our commitment to deepening a mutually beneficial long-term relationship with one of our important new clients, in addition to Bank ABC’s commitment to the Kingdom of Jordan and its major exporters.

JIFCO Chairman, HE Dr. Mohammad Thneibat thanked Bank ABC and JIFCO teams for completing this transaction. He mentioned that this transaction has been under discussion for a long time and appreciated the patience and commitment of both parties despite the pandemic. He hopes this will be the start of a new relationship that will give both parties the opportunity to work together on future projects in Jordan.

The financing was arranged by Bank ABC’s Specialized Finance team, with support from its local team in Jordan. As the sole MLA for lending, Bank ABC becomes JIFCO’s primary relationship bank.

Bank ABC is a leading player in the banking sector in the region and offers innovative wholesale financial products and services, including corporate banking, trade finance, project and structured finance, syndications, treasury and Islamic banking services. It also provides retail banking services through its network of retail banks in Jordan, Egypt, Tunisia and Algeria and its digital bank ila Bank in Bahrain.

Jordan India Fertilizer Company “JIFCO”, a strategic joint venture partnership between Indian Farmers Fertilizer Cooperative Limited “IFFCO” and Jordan Phosphate mines PLC. “JPMC” aimed to ensure a continuous supply of phosphoric acid for key fertilizers such as DAP. The company has been producing phosphoric acid since December 2014 at an annual capacity of 475,000 tonnes in terms of P2O5.