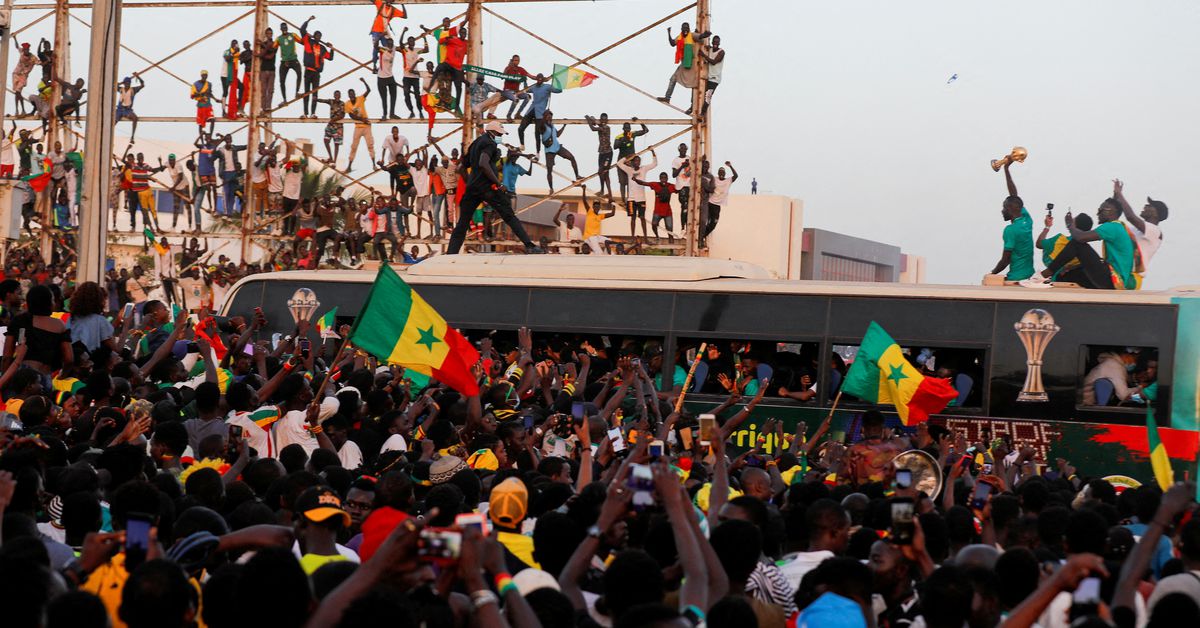 Senegal’s first win of the coveted trophy they have been chasing for 60 years has led to an outpouring of joy and celebration since the 4-2 triumph in a penalty shootout.

Tens of thousands of people filled the streets of the capital Dakar early Monday morning to await the arrival of the winning team. A ticker tape parade through the streets unfolded in the early hours of Tuesday.

Senegal came close to winning the trophy twice, losing to Algeria in the 2019 final and to Cameroon in the 2002 final.

Senegal fans celebrate and welcome the Senegal national soccer team as they arrive on a bus after their African Cup victory, in Dakar, Senegal February 7, 2022. REUTERS/Zohra Bensemra

Hundreds of people lined the avenues and streets surrounding the presidential palace in downtown Dakar on Tuesday night for a reception to thank the players.

Sall awarded the players Senegal’s highest honour, making them Grand Officers of the National Order of the Lion.

“Furthermore, as a sign of gratitude, and on behalf of the nation, the players and other members of the official delegation will each receive a special bonus of 50 million CFA francs ($87,412) and a 200 square meter plot of land in Dakar. .,” Sal said.

He added that they would also receive 500 square meters of land for a memorial estate in Diamniadio, a futuristic new economic and industrial hub about 45 km from Dakar where a new national football stadium will be inaugurated on February 22.

2022-02-09
Previous Post: Senegal, a new country of winners, heroes and an African vision of tourism
Next Post: Protesters once again take to the streets of Sudan, denouncing the coup and the arrests