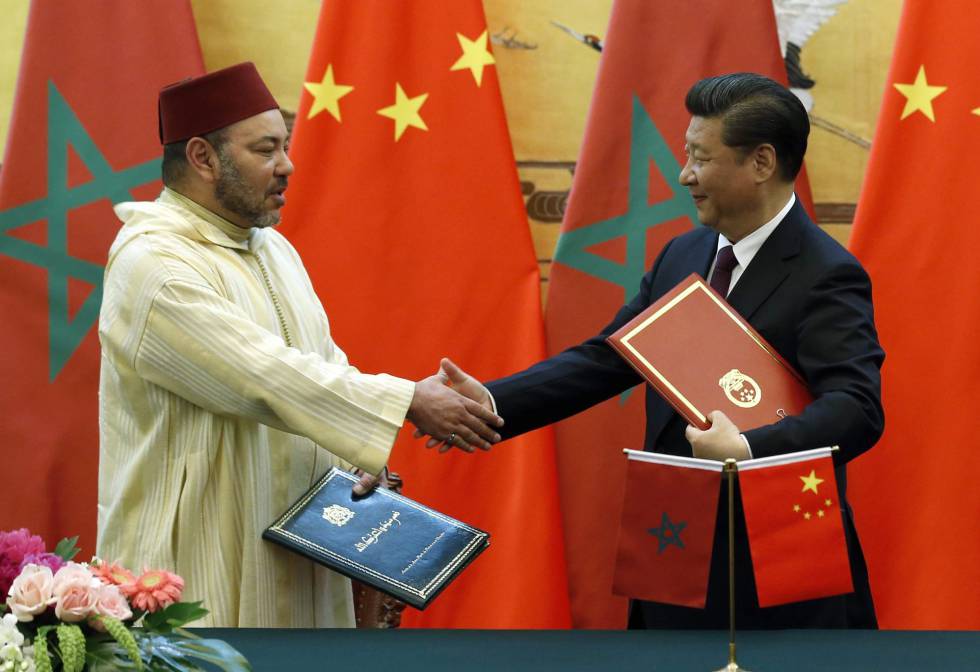 Morocco is no longer content to be a key strategic ally of the United States and has signed a trade cooperation agreement with China, Washington’s great rival. For its part, Beijing is not content with being Algeria’s leading supplier and builder of its major infrastructures, but also intends to promote its new Silk Road in Morocco, Algeria’s great geopolitical rival. It’s the name Chinese President Xi Jinping first used in 2013 to refer to a vast infrastructure plan that now spans five continents. The road is also very present in the Maghreb.

The agreement between Rabat and Beijing was signed on January 5 by videoconference by Moroccan Foreign Minister Naser Burita and Ning Jizhe, vice-president of the Commission for National Development and Reform. The signing consolidates the meeting between the King of Morocco, Mohamed VI, and Xi Jinping in Beijing in May 2016. The following year, Morocco signed a Memorandum of Understanding on the New Silk Road, known in English as name of Belt and Road Initiative (BRI). .

This memorandum has so far not resulted in a shower of Chinese investment or loans for Morocco. That same year, the monarch promoted the major Mohamed VI Tanger Tech City project, a 200-hectare industrial zone planned on the outskirts of Tangier to house 200 Chinese companies in the aeronautics, textiles, automotive and manufacturing sectors. electronic. The project has so far been a fiasco. But he was not abandoned.

The new agreement aims to breathe new life into this and other projects. Among some of Morocco’s favorite plans is the extension of the high-speed train to Marrakech, which now reaches Casablanca from Tangier. Rabat’s objective is to bring major railway projects to Western Sahara.

One of the major projects in which China has been interested, according to several local media, is the construction of a liquefied natural gas (LNG) terminal. Since Algeria shut down the Maghreb-Europe (GME) gas pipeline in October, Morocco has been forced to look for alternatives. And one of them could be the construction of this terminal, for which access to credits from Chinese entities would be essential.

Minister Burita said during the signing of the agreement that its objective is to “promote access to Chinese financing provided by the New Silk Road for large-scale projects”. For his part, Ning said the signing “marks a new era in cooperation between China and Morocco.” And he pointed out that this North African country is the only one in the region to have three Confucius Institutes, which promote the dissemination of culture and the teaching of the Chinese language.

Join MRT to follow all the news and read without limits.

Trade has increased by 50% over the past five years. And the visa waiver for Chinese tourists increased their visits from 10,000 tourists in 2015 to more than 200,000 in 2018, according to Burita, in statements collected by the Efe agency.

It is true that the Chinese presence in Morocco is not comparable to that in Algeria, where it has built much of the country’s main infrastructure and where 40,000 Chinese reside. But China’s collaboration, through the state-owned pharmaceutical company Sinopharm, was essential for Morocco to become the country in Africa with the highest number of people vaccinated against the pandemic, with 63% of the population immunized with the regime. full. .

The understanding between the two countries goes beyond business. And this affects the issue of human rights. Mohamed VI’s visit to China in 2016 included an extradition deal. The signature was ratified by the Chinese National People’s Congress in January 2021. Shortly after, last July, Chinese activist Idriss Hassan, 33, from the Uyghur ethnic minority, who mostly professes the Muslim religion. Hassan, an IT designer, has lived in Turkey since 2012 with his wife and three children as a refugee. He was arrested in Casablanca after Interpol issued a red notice, which he later rescinded. China, internationally censored for abuses against the Uyghur minority, accuses him of belonging to a terrorist organization of which Hassan says he is completely unaware of the existence.

Amnesty International published the words of Zaynura, the activist’s wife, in September: “I am afraid that if they send my husband back to China, I will never see him again. Now that he’s gone my second daughter wakes up every day saying she dreamed of her dad and often cries for no reason. The NGO assures that the activist runs a high risk of being tortured if he is extradited.

The Rabat Court of Appeal ruled on December 15 in favor of Hassan’s extradition and now everything depends on the Moroccan executive. Amina Bouayach, president of the National Human Rights Council (CNDH) – an organization defined in its statutes as independent and whose powers are comparable to those of the ombudsman in Spain – asked in a letter to the head of the Moroccan government, Aziz Ajanuch , not to extradite Idriss Hassan.

Hassan’s defenders only hope that international pressure can influence Morocco’s decision. And it won’t be easy. the local weekly As is He underlined that China has taken in recent months “another dimension” among Morocco’s strategic partners. He also recalled that more than 40 million doses of the Chinese Sinopharm vaccine have already arrived at Mohamed VI airport in Casablanca, where the activist was arrested in July. In addition, since last year there has been an agreement between Sinopharm and the Moroccan company Sothema, so that vaccines can be produced in Morocco for sub-Saharan Africa. So far, Morocco has given no sign of wanting to jeopardize the privileges of its relationship with the world’s second largest trading power.

China is also one of the five permanent members of the UN Security Council – along with France, the United States, Russia and the United Kingdom – a key body to arbitrate the conflict on which foreign policy revolves. country: Western Sahara.

2022-01-14
Previous Post: This is the best country for education – 24/7 Wall St.
Next Post: Algeria: The sectors of justice and the interior, main axes of the government meeting