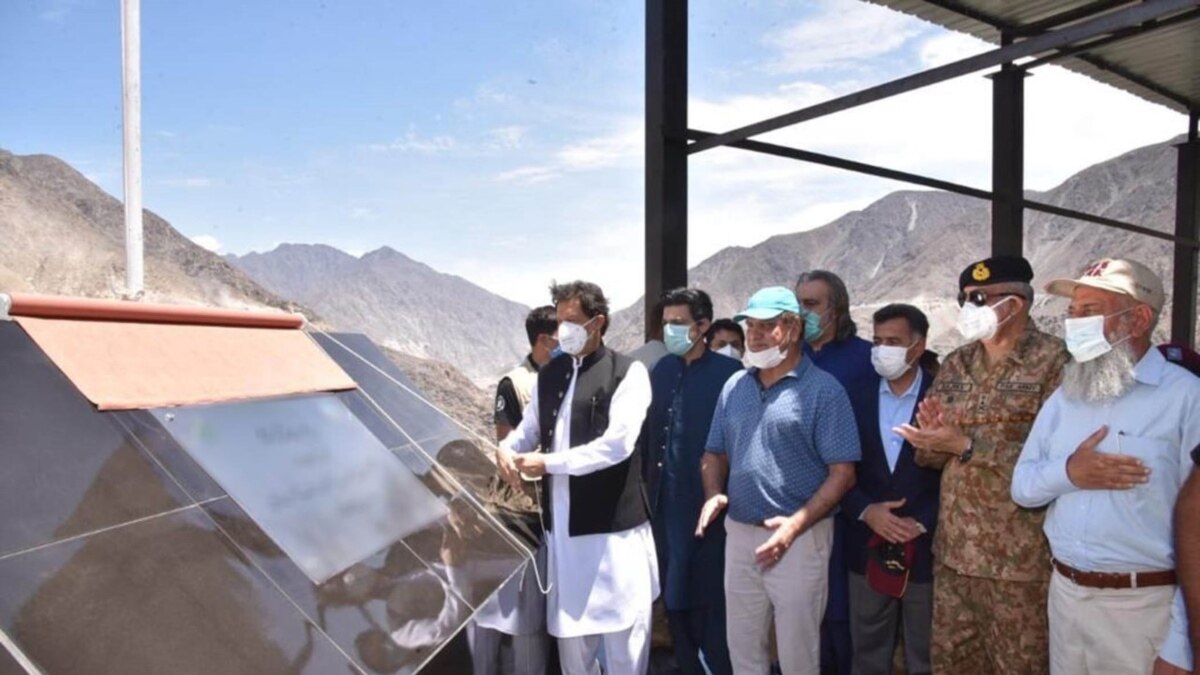 Pakistan and a close ally of China have officially launched the construction of a multibillion-dollar dam in the Pakistani-administered part of the disputed Kashmir region, ignoring the objections of its Indian rival to the project.

The Diamer Bhasha multipurpose dam is expected to be completed in 2028, at a total cost of more than $ 8 billion. It is expected to generate 4,500 megawatts of inexpensive and clean electricity.

“This will be Pakistan’s third large dam, as neighboring China has built nearly 5,000 large dams out of more than 80,000 dams in total,” Khan said.

The dam, with a usable storage capacity of about 6.5 million acre-feet of water, will rise to a height of 272 meters in the northern Gilgit-Baltistan region, about 400 kilometers from the only overland passage from Pakistan to China.

Officials said the project would also help with flood control and add 1.2 million acres of farmland, in addition to creating 16,000 jobs for local residents.

A consortium of the state-owned China Power and the Pakistani military’s commercial wing, Frontier Works Organization (FWO), is building the project on a 70 to 30 ratio.

India, which controls most of Kashmir and claims it in its entirety, just like Pakistan, has denounced the project as a violation of its territorial sovereignty.

The Pakistani and Chinese governments dismissed the Indian concerns as misplaced, insisting that the economic collaboration aims to improve “the well-being of the local population.”

The dam, however, is not part of the ongoing multibillion-dollar China-Pakistan Economic Corridor (CPEC) project, a centerpiece of President Xi Jinping’s global Belt and Road Initiative (BRI).

Beijing also signed two agreements with Islamabad as part of the CPEC last month to directly invest up to $ 4 billion in the development of two hydroelectric projects in Kashmir, with a total capacity of around 1,800 megawatts.

Michael Kugelman, deputy director of the Asia program at the Washington-based Wilson Center, sees growing Chinese investment in Pakistani-administered Kashmir as a blow to India.

“These measures will bring an additional point of tension to an Indo-Chinese relationship which is already more strained now than it has been for several decades,” he said.

Kugelman was referring to last month’s border clash between the two Western Himalayan countries in which 20 Indian soldiers were killed. Chinese and Indian officials are currently engaged in talks to ease tensions.

“We can also read them, in part, as a provocative response from Beijing and Islamabad to growing verbal threats from India in recent months to make some sort of movement on Pakistani-administered Kashmir,” Kugelman said.

Indian leaders have repeatedly asserted in recent months that militants are preparing to infiltrate Indian-controlled Kashmir from the Pakistani side and have warned of cross-border military counteraction that will fuel mutual tensions.

China has invested around $ 29 billion in Pakistan, including direct investment, soft loans and grants, which has built or constructed power plants, roads, railways, the new deep-water port of Gwadar and an adjacent international airport in Balochistan province.

Chinese and Pakistani officials say the investment created around 75,000 jobs for locals and effectively reduced, if not ended, years of crippling blackouts in Pakistan.

“Despite the COVID-19 epidemic, work on the CPEC is in full swing and new projects within the framework of mutual collaboration will be launched in the coming days,” Asim Saleem Bajwa, an assistant to the prime minister who oversees the huge program, said at a recent meeting of Pakistani and Chinese officials.

Bajwa was apparently responding to reports that the coronavirus pandemic has slowed work on CPEC projects.

CPEC’s investments, however, have worried critics in Pakistan and abroad, who have expressed concern and skepticism in the wake of the financial crisis facing the country.

Alice Wells, who recently retired as the Trump administration’s senior diplomat for South and Central Asia, had publicly warned that Chinese investments under the CPEC could become a government trap. long-term debt for Pakistan, citing relatively high costs and an alleged lack of transparency in contracts, among other concerns.

“Hopefully, not at the expense of Pakistan’s sovereignty, environment, debt sustainability or corruption. Now is the right time to renegotiate BIS terms which, in hindsight, were disadvantageous or one-sided, ”Wells tweeted earlier this month.

She was responding to Khan’s comments that his government would complete the $ 40 billion to $ 60 billion CPEC project “at any cost” because it is “Pakistan’s future”.

Islamabad and Beijing vehemently dismissed unwarranted concerns that CPEC is a “debt trap” or a burden on the Pakistani economy.

“The CPEC, as the flagship of the BRI, is already a success and has entered its second phase successfully,” noted Mushahid Hussain, who heads the Pakistani Senate’s foreign affairs committee. “Energy and infrastructure projects were completed on schedule, 75,000 Pakistanis got jobs in BRI projects and 28,000 Pakistani students are studying in China.