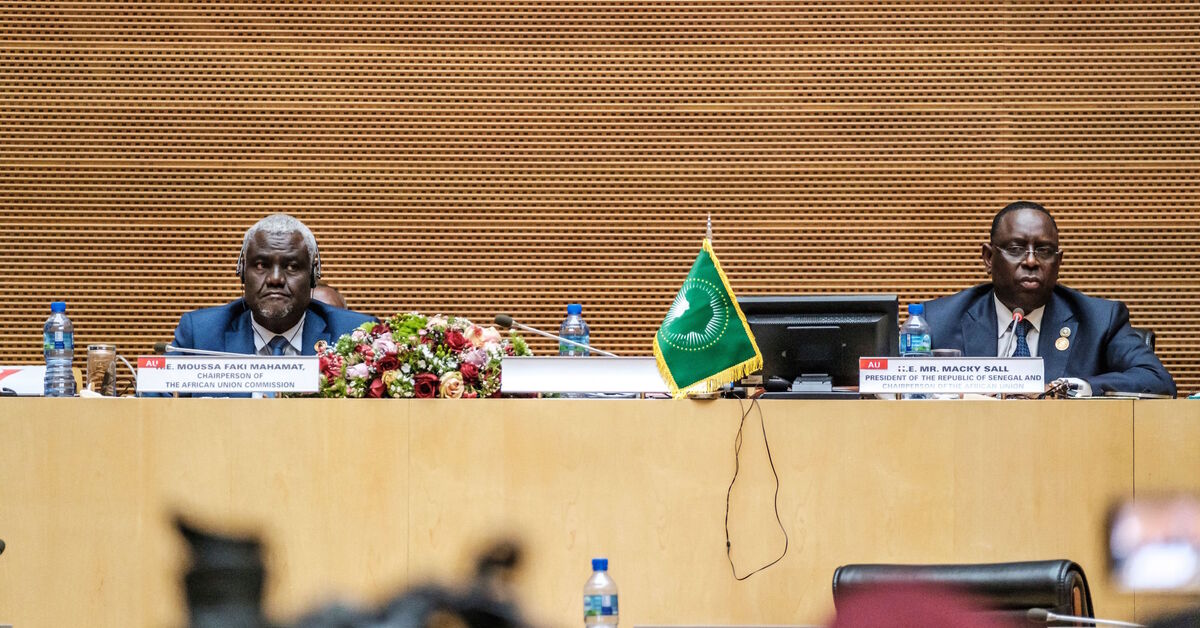 The African Union (AU) yesterday suspended its debate on Israel’s status as an observer state. A group of countries have been calling for a vote for a few months on a decision taken last July by the chairman of the AU Commission, Moussa Faki Mahamat, to grant such a status to Israel. These countries hoped to overturn the decision via a general vote at the annual AU summit in Addis Ababa. Suspending the debate means the issue will come up for discussion again next year, at the 2023 AU summit.

The newly elected AU chairperson, Senegalese President Macky Sall, said after the meeting that a special committee has been set up for this issue. The Committee will consult with Member States, with the aim of building consensus on the matter. “It will be composed of eight heads of state and government, and will present its recommendations at the next summit,” he noted.

The suspension of the debate represents a new victory for Israeli diplomacy. Israel had observer status with the Organization of African Unity, which preceded the AU. But when it was dissolved in 2002, giving way to the new organization, Israel did not regain the same status. Libyan leader Muammar Gaddafi has led the campaign against Israel, threatening to withdraw Libyan financial support for the body if such a move is made. Israel submitted two official applications to become an observer – one in 2003 and one in 2016 – but was rejected on both.

Then, following the signing of the Abraham Accords with the Emirates, Bahrain, Morocco and Sudan, and when a new government took place in Jerusalem last May, Israel decided to try again. Ambassador Aliza Bin Noun, then head of the Africa division at the Ministry of Foreign Affairs, personally committed to this mission. With the blessing and encouragement of Foreign Minister Yair Lapid, Israeli diplomats were instructed to raise the issue at every meeting they held with their African counterparts.

The combination of a new diplomatic organization and renewed Israeli diplomatic efforts has paid off. On July 22, Faki’s office announced that Israel had been granted observer status. The announcement surprised even Israel. Hours after the announcement, Israel’s ambassador to Ethiopia was summoned to Faki’s office in Addis Ababa to present his credentials.

The decision to accept Israel angered the Palestinians, who have enjoyed observer status with the organization for some years, as well as several permanent members of the group. Chief among the opposing countries was Algeria, already furious with the Abraham Accords. In 2020, in order to convince Morocco to join normalization agreements with Israel, and in a blow to neighboring Algeria, the Trump administration agreed to recognize Moroccan sovereignty over the controversial Western Sahara region. Algerian Foreign Minister Ramtane Lamamra pointed the finger at Israel at the time, blaming it for the growing division between Rabat and Algiers. When Israel was granted observer status, Lamamra launched a diplomatic campaign against it, enlisting some 13 other AU members and claiming that Faki had no authority or ideological justification to offer accreditation to Israel.

Another country active in this anti-Israeli campaign was South Africa. Jerusalem and Pretoria maintain diplomatic relations, but relations have soured for three decades due to South Africa’s strong support for the Palestinian cause. South African President Cyril Ramaphosa has come to the forefront of the campaign to vote Israel out of the AU. Palestinian Prime Minister Mohammed Shtayyeh arrived in Addis Ababa for the summit on Feb. 5, urging member states to withdraw Israel’s accreditation. Instead of focusing on the political and security instability on the continent, the latest military coups in Mali and Burkina Faso and the economic crisis generated by the coronavirus, the AU summit was suddenly dominated by the Israeli question.

Faki had kept a rather low profile on the matter since July. Still, Israeli diplomatic sources told Al-Monitor that in recent months he had been in contact with several African countries, who assured him that they fully support Israel and its July decision.

This was evident in Faki’s lengthy speech to African leaders on February 6, defending his decision. “When I received the request for observer status for Israel…I carefully considered the number of states that have recognized the State of Israel on the mainland. The figure leaves no doubt. 44 members of our Organization recognize Israel and have established diplomatic relations with this State. 17 have opened embassies in Tel Aviv. 12 have opened consulates general there, not to mention that a large number of African States have opened their markets and their economic space to Israeli companies and signed cooperation agreements in fields as varied and sensitive as: Education/Training, Defense , Security, Intelligence, Nuclear Cooperation, Agriculture, Technological Innovations, Health, Economy and Finance etc. Faki said.

A statement issued by Israel’s Foreign Ministry said: “Israel’s acceptance as an observer in the African Union is of obvious interest to all of us – to Israel, to the African Union and to members. of the Union. It will facilitate increased cooperation between Israel and African countries. Israel attaches great importance to expanding dialogue and cooperation with the African Union in line with changes in the Middle East, and regards it as an important expression of our joint activities for the continent’s next generation.

2022-02-07
Previous Post: 1,500 Beneficiaries of Niger Delta Amnesty to Get NIRSAL Loans
Next Post: How to pay with Bitcoin and where to spend it