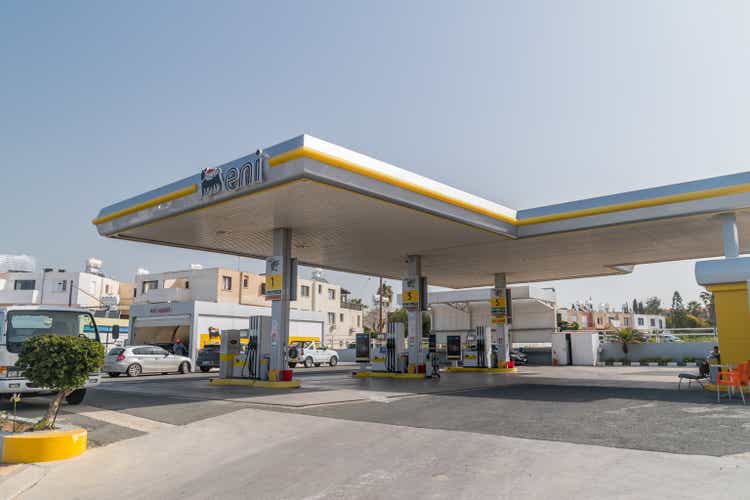 Last Friday Eni (NYSE:E) released its quarterly results. We confirm our price target of €12.5 per share supported by macro oil & gas expectations and an attractive dividend yield. In the medium term, we see positive catalysts such as the restructuring of Saipem and the IPO of Plénitude. The quarter saw important strategic developments for Eni. Besides the IPO, the Italian oil player saw:

After CAPEX organic financing of 1.62 billion euros, cash flow for the quarter benefited from the share placement of subsidiary Vår Energi with around 0.4 billion euros for Eni. This essentially offset the capital payment to the Saipem joint venture (0.46 billion euros) as part of the financial restructuring.

As for the numbers, Eni closed its accounts for the first quarter with a positive result of 3,270 million euros compared to 270 million euros at the end of the quarter of the previous year. This was achieved with a slight drop in production to 1.6 million barrels (-5% year-on-year). The reason can be explained by the favorable environment for commodity prices: average Brent at $101.4 per barrel, up 67%, and gas prices above €1,000 per thousand cubic meters (+ 426%).

Adjusted EBIT was €5.2 billion, up €3.9 billion compared to the first quarter of 2021. This was due to the strong performance of E&P thanks to the scenario of favorable prices and GGP division. Despite an increased need for working capital, operating cash flow reached 3 billion euros.

Russia is not directly mentioned in the Q1 presentation, but Eni’s response to future supply from Italy is summarized from another angle by the CEO:

“We have reacted quickly to current challenges in the energy market by leveraging our global upstream and our partnerships with producer countries to find alternative and additional supply opportunities for Europe. We have signed important agreements in Algeria, Egypt and the Republic of Congo, while another was achieved in Angola, consolidating our joint operations in the countries and promoting increased gas exports to Italy and Europe in the interest of the transition to a low-carbon economy”.

Based on currently available information, we assume that there are no significant stoppages or changes in the current flow of gas from Russia, although there are risks and uncertainties. potential associated with the current war in Ukraine.

There is still no definitive estimate of the single contribution on the so-called tax on additional profits linked to the energy sector. This contribution is part of the tax package adopted by the government to counter the economic and humanitarian effects of the Ukrainian crisis. Eni spoke generically of a few hundred million euros.

Eni reaffirmed the outlook with an upwardly revised adjusted operating profit forecast for the gas sector, which should be around 1.2 billion euros compared to the previous target of 900 million euros. . Our preference in the oil sector goes to Total.