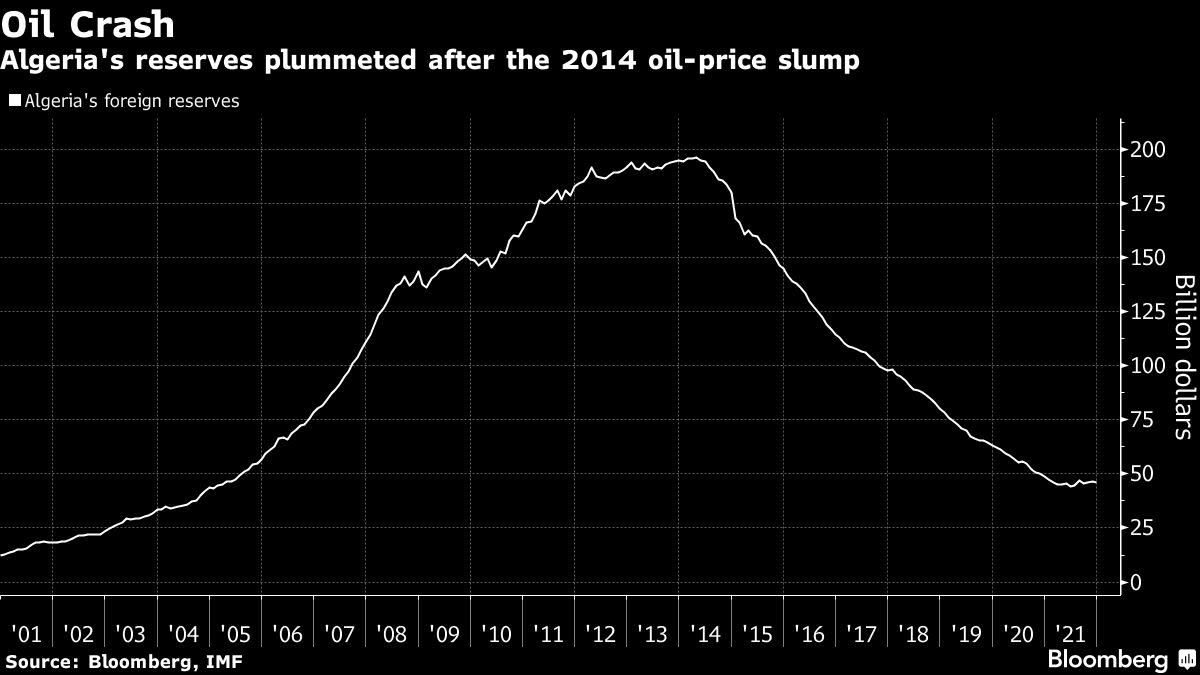 (Bloomberg) – As fears of a Russian invasion of Ukraine leave the West searching for more natural gas shipments, an energy-rich country on Europe’s doorstep seems an obvious port of call .

Algeria, a major gas supplier to Italy and Spain and the European Union’s biggest source of imports after Russia and Norway, may be able to provide at least some of the relief that the United States and others are looking for. The move would fill the North African nation’s depleted coffers and give it diplomatic clout in Europe. It could also upend Algeria’s growing ties with Russia, which has repeatedly denied plans to invade Ukraine.

It’s “a no-win situation” for Algeria, said Cyril Widdershoven, energy analyst and founder of risk consultancy Verocy. If the country wants to remain a key energy exporter, it makes sense to help Europe, but that risks undermining plans to deepen relations with Moscow, he said.

It’s unclear how much the OPEC member, where energy exports have stagnated due to lack of investment and rapidly growing domestic demand, can actually save. Algeria pursues a resolutely independent foreign policy and is led by civilian and military officials from the liberation war in 1960s France, a country with which it has frequent quarrels.

The United States is discussing the issue with companies operating in Algeria, but not with Algerian companies or the government itself, according to a person in Washington familiar with the plans. Algerian officials did not respond to repeated requests for comment. Eni SpA, TotalEnergies SE and Equinor ASA are among the international companies with production sharing agreements in the country.

The European crisis coincides with a period of flux for Algeria’s oil and gas industry, once a reliable source of revenue that allowed the country of 44 million people to subsidize food and fuel and curb political dissent. The fall in oil prices around 2014 derailed this, with the tightening of the economic belt playing a role in sparking a mass protest movement that forced longtime President Abdelaziz Bouteflika to retire in 2019. .

A resurgence in energy prices has combined with a currency devaluation to restore some economic stability, although the so-called Hirak movement has kept up the pressure to demand the removal of the elites who have ruled Algeria for decades. decades. Cuts to the government’s $17 billion subsidy bill could come into effect this year, and the government is trying to reduce wheat purchases from overseas.

All this does little to change the nature of Algeria’s energy-bound economy, which the International Monetary Fund has long urged Algeria to diversify. However, rising oil and gas revenues increase the chances that any sweeping restructuring will be postponed, according to Riccardo Fabiani, North Africa project director at the International Crisis Group.

By suppressing protests and targeting Islamist and separatist groups, Algeria “succeeded in temporarily neutralizing the main threats to the stability of the regime, but it is not clear what the president and the government want to do next”, a- he declared.

Energy exports may not be a crutch for long. Algerian gas production hit its lowest level in at least a decade in 2019, according to the Gas Exporting Countries Forum. Meanwhile, more fuel is used at local power plants to cater to the growing population, leaving less opportunity for export.

There is a “battle to at least stabilize gas export volumes”, according to Widdershoven. This is “mainly due to internal exploration and production constraints”.

While Algeria could increase its supplies of liquefied natural gas to Europe, the quantities available will not come close to filling the gap resulting from a major slowdown in flows from Russia, he said.

External relations are also a factor. Towards the end of October, Algeria shut down a key gas pipeline to Spain that ran through Morocco after an escalating dispute with the neighboring North African kingdom over its relationship with Israel and the disputed territory of Western Sahara. Still, Algiers managed to maintain supplies to Spain via other routes.

That said, Algeria may have other considerations than pleasing Europe. A major force in the non-aligned movement during the era of US-Soviet rivalry, it stands outside the regional order led by the Gulf Arabs.

Russian energy giant Gazprom and Algeria promised in September to work together on gas production and transportation. Algerian state newspaper El Moudjahid titled the meeting as “A partnership between two giants”. State producer Sonatrach announced on Wednesday that the El Assel gas field, its joint venture with Gazprom, would come into production in 2025.

“Analysts are concerned about the current energy stranglehold by Russia and other European countries,” Widdershoven said. Now, this may be “a real issue to consider”.

2022-02-03
Previous Post: Kinds of Bad Credit loans you can Get If You Have A Bad Credit Score
Next Post: Defiantly Belleville: a gourmet journey to the multicultural heart of Paris | Parisian holidays