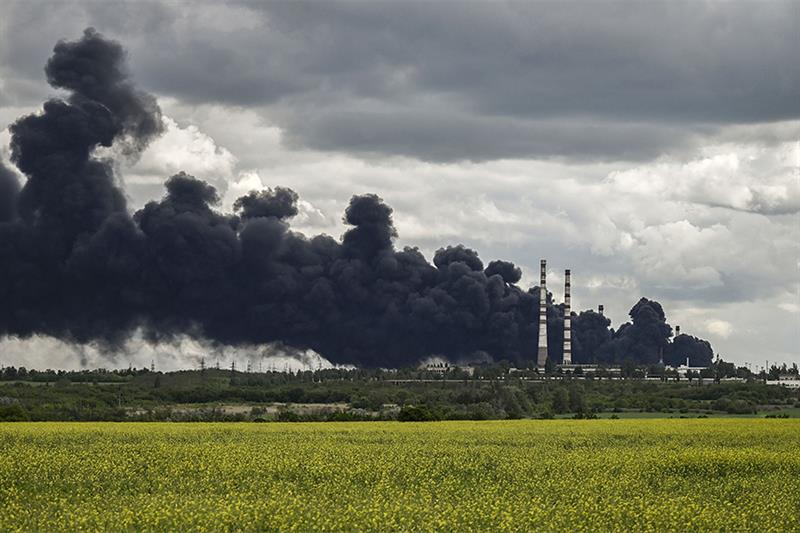 June promises to be a busy month for Egyptian diplomacy, which strives to ensure international diplomatic attention is given to arguably overlooked concerns in the Middle East and southern Mediterranean region.

“The war in Ukraine has taken much longer than expected, and it is clear that the crisis will continue for at least a few more months,” said an Egyptian diplomat, speaking on condition of anonymity.

“Our region has suffered greatly as a result of the war, and our many concerns cannot be ignored until the world can agree on a solution,” he added.

With Arab countries, led by Egypt, suffering from a sharp drop in grain supplies from Russia and Ukraine, food security has become a pressing concern for most Arab capitals, which are struggling to find alternative resources.

Egypt opted for sources such as India and possibly Argentina. The further away the source, the more expensive the price becomes, however, straining state coffers already strained by a major drop in foreign investment and tourism receipts.

But Egyptian officials say Egypt remains in a significantly better position than some other countries in the region whose food security has been seriously compromised.

According to the Egyptian diplomat, the concern over food security “comes on top of other economic and political problems which are partly caused by the war in Ukraine and partly exacerbated by it”.

Several Arab capitals have already asked for help and warned their international partners that a delayed response could mean unrest in some countries, according to informed diplomatic sources.

“We believe this is a very difficult time and it is in everyone’s interest to reach out with all the help possible, because what is at stake here is the stability of a region. very unstable,” the Egyptian diplomat said.

While attending the Davos meetings of the World Economic Forum (WEF) this week, Foreign Minister Sameh Shoukri met Borge Brende, Chairman of the WEF, to discuss the economic crisis and food security issues, according to a statement. of ministry spokesman Ahmed Hafez.

“The European Union has promised a strong assistance package on food security, but it is certain that the agenda of Von der Leyen’s talks in Cairo will also touch on energy cooperation. This is a vital issue for the Europeans given their desire to be independent of Russian gas supplies,” said the same Egyptian diplomat.

According to Egyptian and European sources, while in Cairo, Von der Leyen will discuss modernizing Egypt’s natural gas supply to Europe. This, they explained, will mean an increase in gas exports from Israel to Egypt to allow the gas to then go to Europe.

The EU has actively engaged with several Arab countries in the field of energy supply. However, the Gulf Arab countries have not responded to European, and indeed American, demands for increased oil production.

Europeans went to Algeria in search of more sustainable gas supplies. However, Algeria has also come under pressure from Russia, a close partner, not to rush any increase in gas exports.

Algeria is a key exporter of natural gas to Europe, but according to an article by Intissar Fakir, senior researcher for North Africa at the Washington-based Middle East Institute, “the current production capacity of Algeria limits its ability to significantly increase export volumes to Europe. ”

“From now on, any significant increase in Algerian production will require years of exploration and development and, more importantly, further energy industry reforms to attract new investment,” Fakir wrote.

According to recent statements by Tarek Al-Molla, Egyptian Minister of Energy, Egyptian natural gas exports to Europe currently account for around 10-15% of total gas imports to Europe. Egypt, he said, is trying to increase its share of the European gas market.

Libya is another North African country with considerable oil and gas reserves, and Europe is also eyeing Libya to diversify its energy suppliers.

European diplomats based in Cairo claim that European capitals are engaging Libyan interlocutors. However, they added that Libya’s continuing internal political and military wrangling did not make the country a reliable source of energy supply.

“Obviously, we are not getting rid of Russian supplies overnight, but I think it will take some time for Libya to be a stable member of the regional and global energy market,” he said. ‘One. Two.

This year alone, inter-Libyan disputes have blocked oil exports at least twice. The continued failure to find a compromise between the parallel Libyan governments of Abdel-Hamid Dbeibeh and Fathi Bashagha has made it difficult for Libya to find stability.

Egypt, according to informed diplomatic sources, has signaled its willingness to participate and possibly host a meeting to help the Dbeibeh and Bashagha camps reach a compromise. The proposed meeting could bring together both Egypt and Turkey alongside the United States and various European countries.

Getting Egypt and Turkey on a joint task force on Libya, diplomatic sources from both sides said, is not as difficult today as it was a few years ago.

According to this diplomat, the resolution of the crisis in Libya could now receive more attention, given the interest in its energy resources following the war in Ukraine. This, he added, however, was not necessarily the case for other pressing concerns in the Middle East.

“It’s no secret that the Palestinian cause has almost been taken off the priority list of international politics for more than a decade,” he said.

According to the Egyptian diplomat, “many meetings are being discussed to address the issue of regional security and cooperation, the Palestinian cause being central”.

“We may not agree on everything, but what we all agree on is that this region with all its problems, including those caused by the war in Ukraine, needs immediate and serious action to avoid giving the world another major crisis,” he concluded.

*A version of this article appeared in the May 26, 2022 edition of Al-Ahram Weekly.

2022-05-24
Previous Post: Submarine cable to link Algeria to Italy
Next Post: US sanctions official and financial network of Hamas