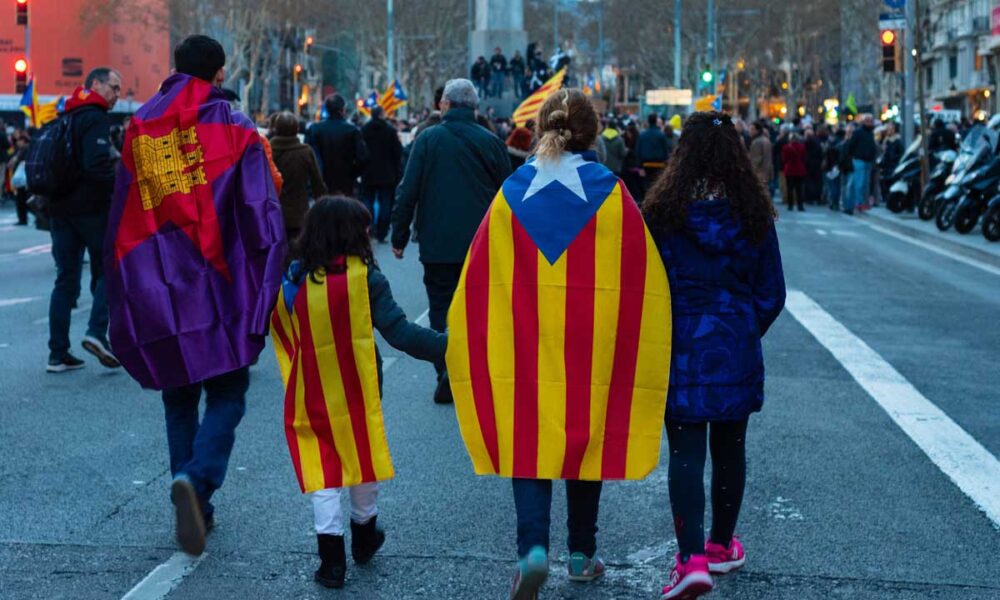 Geopolitics or the “Pegasus affair”: what is blocking dialogue between Madrid and Catalonia

In 2022, the Spanish coalition government led by Socialist Party leader Pedro Sanchez faced a host of interconnected challenges, both internally and externally. The domestic agenda which includes socio-economic recovery after the COVID-19 pandemic and a new round of talks with Catalonia regarding its status seems to be sidelined in a demanding geopolitical situation in Europe. Meanwhile, the Spanish Prime Minister is seeking to maintain the support of regional parties in parliament. However, the ‘Pegasus affair’ which sparked outrage in Catalonia has complicated Madrid’s fragile relationship with the autonomy.

Divisions between Spain’s central government and Catalonia have a long history, but the issue has become urgent due to two recent factors. First, the coalition government of PSOE (Spanish Socialist Workers’ Party) and Unidas Podemos (United We Can) formed following the results of the November 2019 legislative elections is below the parliamentary majority. Such a situation has increased the role of small regional parties, especially from Catalonia and the Basque Country. Second, the local elections in Catalonia held in February 2021 resulted in a coalition government formed by the nationalist parties — Esquerra Republicana of Catalonia (Republican Left of Catalonia) and Junts by Catalunya (Together for Catalonia). Both aim to hold another referendum on independence.

As a prominent Russian expert in Spanish studies, SM Khenkin, argues, the Catalan desire to organize a new public vote on its status remains intact despite the fact that the 2021 regional elections were organized by the PSOE. The Socialists failed to rally other parties behind their program and eventually let the Nationalist parties form the autonomous government.

One of the main objectives of the program of Pere Aragones, the new leader of the autonomy, is to reach an agreement with Madrid on the holding of another referendum on the status of Catalonia. That of 2017 showed mixed results since more than 90% voted for independence but a participation rate only reached 43%. At the same time, Spanish Prime Minister Pedro Sanchez, faced with the need to safeguard his positions within the electorate and maintain parliamentary support for Catalan forces, is trying to promote talks with autonomy.

A successful interaction with the region will make it possible to present oneself as a leader capable of resolving a protracted political dispute. Nevertheless, negotiations could not take place in 2020 due to COVID-19. The first meeting between the Spanish Prime Minister and the Catalan leader did not take place until June 2021 and was followed by a series of talks in September. However, after a short thaw, came another long pause. The reason was the lack of a plan for a new cycle. The parties have accused each other of having blocked the process, even if certain geopolitical difficulties have an imminent effect on the Spanish agenda.

2 major geopolitical challenges for Spain in 2022

From the PSOE — Unidas Podemos coalition government was formed in 2019, Pedro Sanchez dealt with a mix of internal and external issues. In 2022, Spain faced two other major geopolitical challenges that left the Prime Minister with limited economic resources and little political room for manoeuvre.

Firstly, Spain had to respond to the Ukrainian crisis which imposed the need to act in solidarity with the European Union. It was about imposing sanctions on the Russian Federation and supporting Ukraine. Madrid was under heavy pressure due to its inactive participation in supplying Kyiv with arms. After weeks of diplomatic calls and a visit by the Spanish Prime Minister to Ukraine in April 2022, Spain sent military aid worth 31 million euros in May. He was well received by Brussels. Later that month, General Secretary Jens Stoltenberg traveled to Madrid to commemorate the 40e anniversary of Spain joining the alliance. Speaking to local media ABC, he avoided answering a provocative question regarding Spanish arms deliveries to Ukraine and praised the Kingdom for its aid in a humanitarian dimension.

The second challenge was the energy crisis and increasing energy insecurity in a context of deteriorating relations between Algeria and Morocco. In April 2022, Algeria represented 43% of the gas imported by Spain, the United States obtained second place with 14.2%, then Nigeria with 11.5% and Russia with 8.9%. Moreover, Algeria is one of the 5 most important energy suppliers for the EU. However, the fact that Madrid resells hydrocarbons to Morocco has caused concern in Algeria.

In the fall of 2021, a protracted conflict between the two Arab states entered a new phase. Rabat has been accused of sponsoring terrorism and causing bushfires in the neighboring country. Not only did Algeria break diplomatic relations with Rabat, but it also refused to extend a gas transit contract via Morocco to the Medgaz gas pipeline which crosses the Mediterranean Sea bypassing Rabat. In addition, in the spring of 2022, Algeria suspended the friendship treaty with Spain and threatened to cut off its imports to the Kingdom if it continued to resell gas to other states.

External problems made P. Sanchez pay more attention to showing solidarity with the EU, as Madrid is heavily dependent on European post-COVID recovery funds for the implementation of its socio-economic projects. Consequently, the ruling coalition has postponed further talks with Catalonia citing the lack of time and resources to prepare its position and agree on the agenda. The geopolitical situation has been accompanied by a number of protracted internal political problems.

When P. Sanchez took over in the winter of 2020, the coronavirus outbreak put all plans for the top-level talks between Madrid and Catalonia on hold. The first meeting took place only in the summer of 2021. As it turned out later, the parties had only 6 months to resolve their issues, because in February 2022 the Russian special military operation in Ukraine has caught the public eye by putting aside the majority of domestic issues not only in Spain, but in many other European countries.

Moreover, the positions of the Catalan nationalists in 2022 have become weaker than before. According to the study published in El Mundo, in March only 38% of Catalans supported independence, the lowest number since 2014. Meanwhile, trade unionists made up 53%. These data revealed that citizens of the autonomy were reluctant to see their region independent and without state protection during difficult socio-economic times in Europe. Moreover, the results highlighted the fact that more people tended to trust Madrid as a guarantor of well-being amid challenges.

Such figures could have allowed P. Sanchez to fully focus on solidarity with Europe and the 2022 NATO summit in Madrid, but in the spring of 2022 it was revealed that telephone conversations of politicians high-ranking Catalans had been bugged in 2017-20. The situation has been dubbed the “Pegasus affair” after the software used to track phone calls. Later, Pedro Sanchez and Defense Minister Margarita Robles were also reportedly bugged.

The situation has sparked huge discontent among the main Catalan parties. Esquerra Republicana de Catalunya and Junts per Catalunya have announced their intention to stop supporting the PSOE – Unidas Podemos coalition in parliament. Meanwhile, Spain’s National Intelligence Committee acknowledged the wiretapping of 20 Catalan politicians, but stressed that the measures were taken in accordance with relevant rulings by Spain’s Constitutional Court. P. Sanchez has had to deal with the need to reduce the growing tensions that have put his government on the brink of losing the vital votes of both Catalan parties. He took two steps.

First, the PM used Circle of Economy (Economic Conference of Entrepreneurs) held in Barcelona in early May to meet for the first time face-to-face with his Catalan counterpart in 2022. On the sidelines of the event, P. Sanchez and P. Aragones agreed to bridge the gaps through dialogue and a “fair inquiry”. The head of the Spanish government stressed the importance of preserving the political partnership between the Catalan parties and the PSOE – Unidas Podemos coalition necessary for the stable development of the Kingdom in a difficult period. Furthermore, P. Sanchez stressed the need to ensure “the coexistence of Catalonia and the rest of Spain” in order to resolve emerging divisions together.

Secondly, Pedro Sanchez made a concession to the Catalan side. On May 10, 2022, the head of the National Intelligence Committee Paz Esteban was replaced by Esperanza Casteleiro. This sparked discontent from the right-wing opposition, as in the eyes of conservatives the prime minister succumbed to pressure from nationalists. At the same time, Catalonia were unhappy and called for further investigation. The “Pegasus affair” has seriously damaged the dialogue between Madrid and Catalonia. It also cast a shadow over the fragile confidence established by previous efforts by Sanchez and Aragones.

Why is it difficult for Madrid and Catalonia to continue the talks?

In addition to geopolitical challenges and heightened mistrust after the “Pegasus affair”, Madrid and Catalonia are encountering difficulties in developing concrete positions. Both governments are led by coalitions in which the partners have different views on how to resolve the Catalan crisis. Esquerra Republicana de Catalunya is more flexible and ready to negotiate a large number of issues with Madrid, while Junts per Catalunya has a more rigid position and mainly aims to organize another referendum in the region. At the same time, the views of the PSOE and Unidas Podemos on how to deal with autonomy also vary. If the Socialists are for a coherent dialogue accompanied by balanced concessions, their partner does not rule out the idea of ​​organizing a national referendum on the status of Catalonia.

The result is a significant gap between the positions of the two parties and their expectations with regard to the dialogue. For this reason, the two sides have repeatedly failed to work out a timetable for consultations and the agenda for the talks. In the summer of 2021, Madrid already made several concessions to Catalonia which led to a thaw between the two sides and restarted the talks. However, the “Pegasus affair” has complicated bilateral relations and weakened the position of the central government. To advance the dialogue, Madrid must place Catalonia beyond any geopolitical situation. Moreover, the right People’s Party (People’s Party), the second force in the Spanish parliament, should also be involved in the negotiations.

Moreover, the frequent reliance on geopolitical threats to explain domestic political failures indicates the absence of common goals to rally a wide range of political movements. Such an approach has only short-term effectiveness. If the COVID-19 pandemic has not formed a broad parliamentary consensus on key national issues, the ongoing Ukrainian crisis is unlikely to become a unifying factor for all Spanish parties.

From our partner RIAC