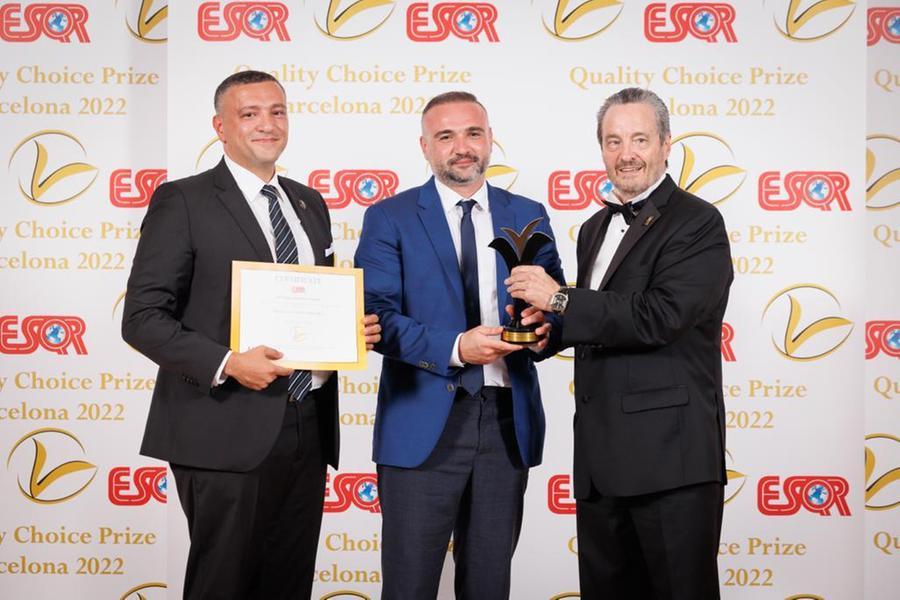 Hassan Rashdan Architects Group won the Excellence Award from the European Society for Quality Research “ESQR” based in Lausanne, Switzerland, during a grand ceremony held recently in Barcelona in the presence of a group of presidents and CEOs of many large international companies in Spain.

The ESQR Group is considered the most important private sector organization that awards international quality awards and deals with leading companies in this field in 179 countries.

Eng. Group CEO Youssef Rashdan, emphasized that this award is the culmination of the company’s journey and efforts in developing the real estate sector in Egypt and abroad, led by the company’s founder, Eng. Hassan Rashdan, who has won numerous international awards and is considered the most prominent pioneer in engineering consultancy in the Middle East, in addition to the group has also received more than 12 international awards.

He assured that the award will help reflect a good image of success and excellence of national projects in our beloved Egypt globally, showing his happiness with this award, which is an international recognition of the pioneering and economic role played by the company and a strong motivation to continue to achieve quality, perfection and excellence.

For his part, Eng. Ismail Rashdan, Vice Chairman of Rashdan Group, said in his speech at the ceremony that “it is a pride for all of us to join the illustrious and pioneering list that has won this award over the past few years, as our company seeks to provide its services worldwide over the coming years to spread the culture of quality”.

He added that this award is the result of several factors, the most important of which is the group’s commitment to comprehensive quality standards such as the ISO 22000-2005 system, using technology through the resource planning system. (ERP), leadership, innovation and development. new brands in the Egyptian market and their success, and increasing the degree of participation in decision-making, meeting customer needs and fulfilling their expectations, and qualifying human resources to be able to achieve continuous development, as well than social responsibility programs.

It should be noted that the International Excellence in Quality Awards 2022 ceremony is organized by the European Society for Quality Research (ESQR), headquartered in Lausanne, Switzerland, as it honors individuals, institutions and public administrations that make exceptional efforts to achieve development. and contribute to the economic development of the institution and the society in which it operates, and the winners are selected by the association based on the results of opinion polls, consumer opinion studies and market research. market.

It has projects in Egypt, Saudi Arabia, Emirates, Kuwait, Qatar, Algeria, Libya, Tunisia, Spain, Italy and the United States of America, and has won 12 international awards in more of the last.