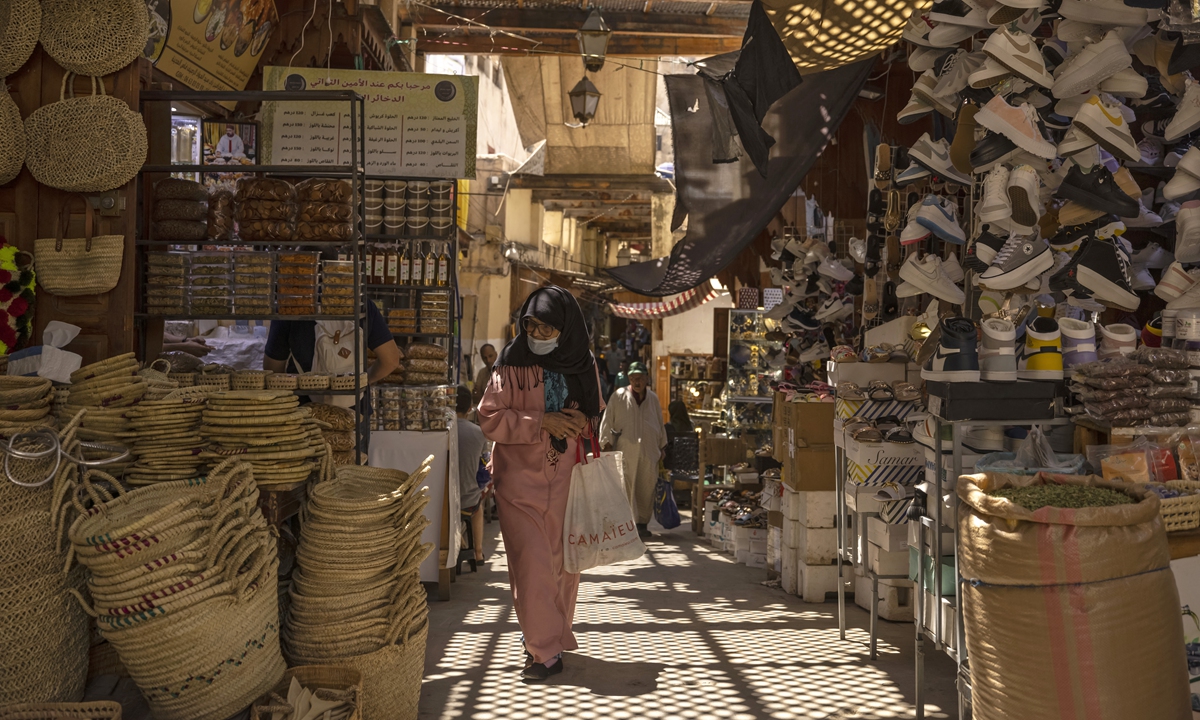 In the embrace of academic history

A woman walks past shops in the ancient Moroccan city of Fez, Morocco, June 8, 2022. Photos: AFP

In the narrow streets of the old city of Fez, Morocco’s first capital, centuries-old places of learning are being revived to promote moderation in Islam, as their founders originally intended.

Studying at the 14th-century Bou Inania madrassa (religious school) inside the UNESCO-listed walled city offers a life “in the embrace of a venerable academic history”, according to the student Moaz Soueif.

The Bou Inania madrasa is one of six such institutions to be renovated since 2017, as part of a program funded by the Moroccan government to preserve the city’s heritage and promote tourism.

Soueif, 25, shares the upper floor of the madrassa with about 40 students from Qarawiyyin University, which was a leading spiritual and educational center centuries before the European renaissance.

Adorned with intricate inscriptions and mosaics, students aren’t the only visitors to Bou Inania. Tourists also flock to see the elegant open-air courtyard, adorned with a central fountain and neatly maintained tiled walls.

The madrassa sits just inside Bab Boujelloud, one of the main entrances to the old city and a key landmark for tourists.

The nearby Cherratine and Attarine madrassas have also been recently renovated for the benefit of tourists, who “generally say that their stay here is spiritual and that the old city is really authentic”, according to guide Sabah Alawi.

Today, Fez serves as a monument to a high point of Islamic civilization, the 13th and 14th centuries, when Muslim influence extended from Morocco to western China.

This period also represents a golden age in the history of the city, which had just been reinstated as the capital of Morocco after three centuries of eclipse by Marrakech further south.

At the end of a steep lane in Bou Inania lined with stalls selling traditional produce and local food, stands the Qarawiyyin Mosque, built when the city was founded in the 9th century.

It later became the heart of the university of the same name – one of the oldest in the world.

University of Fez history professor El-Haj Moussa Aouni said the city flourished in the 13th and 14th centuries along with other centers in the Maghreb region – from Marrakech to Oran in Algeria and Kairouan in Tunisia.

The madrassas of Fez are “annexes to the main university, which were used for the teaching of sciences such as mathematics, medicine, mechanics and music, as well as Islamic studies and literature”, he said. -he declares.

The Qarawiyyin Mosque has a large roofless courtyard surrounded by pillars separating it from the roofed sections, which are reserved for prayer and study.

The site is closed to tourists – although some take advantage of the opening of the gates shortly before prayers to take photos in the courtyard.

At the time of its creation, the university was one of the best in the world and hosted renowned scholars such as the Tunisian Ibn Khaldoun, considered the founding father of sociology.

Gerbert d’Aurillac, a polymath who introduced Arabic numerals to Europe, is credited with inventing the mechanical clock, and later became Pope Sylvester II.

As well as preserving the city’s architectural treasures, the renovations are part of Morocco’s broader efforts to promote Islamic moderation.

Scholars have left their mark on the city – as in the Qarawiyyin library, which houses some 4,000 manuscripts including an original donated by Ibn Khaldoun himself.

“It is one of the oldest libraries in the Islamic world,” said its rector Abdulfattah Boukachouf.

The 14th-century institution is set in a courtyard filled with the tinkling of brass and silver workmen’s hammers. But in the reading room, last enlarged by Sultan Mohammed V – grandfather of the current King Mohammed VI – silence reigns.

In one corner, a team of women are expertly restoring delicate manuscripts.

Qarawiyyin University has launched a new program for postgraduate students who have excelled in writing and memorizing the Quran.

“We should be a model for a tolerant Islam, on the same level as the great scholars who passed through here before us,” he said.

2022-07-14
Previous Post: Newmark: The announcement of the financial results for the second quarter of 2022 will be published before the opening of the markets on Friday July 29, 2022
Next Post: Active Passive Heating and Cooling Market in 2026 to be $245 Billion, New Report Says