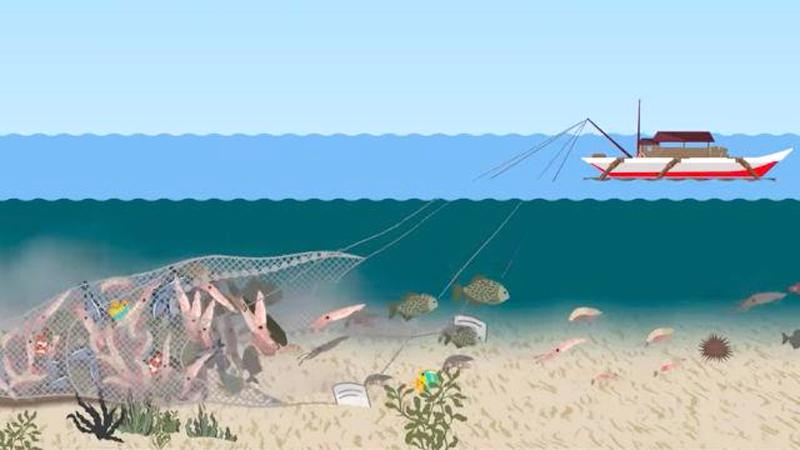 The local fishing industry will not last long at the rate of marine resources being exploited by foreign fishing vessels, environmental pollution and the lack of a clear and coherent national policy to protect the industry, members of the National Fisheries Association said at a press conference last week. week in Colombo to highlight the plight of the fishing community.

“Quick action to stop foreign vessels encroaching on our waters and exploiting resources and polluting the marine environment is crucial to sustaining the local fishing industry,” said the former vice president of National Fisheries. AyeshRanawaka Association following a report that Sri Lanka is in discussions with Indian authorities over a scheme that would allow Indian fishermen to fish in Sri Lankan waters. “The encroachment of our waters by Indian fishermen is nothing new but what is alarming is giving them permission to enter our waters which will allow them to use bottom trawling, which which will be an ecological disaster for the country,” organizers said.

Bottom trawling, which was criminalized by the Aquatic Resources Amendment Act in 2014, causes severe destruction of the ocean floor, resulting in the depletion of aquatic resources.

A maximum prison sentence of two years and a maximum fine of Rs. 50,000 has been imposed on bottom trawling. However, what agitates the fishing community is the banning of trawling by local fishermen while flashing the green light to foreign vessels to exploit the country’s marine resources. “More than 5,000 families in Baththalangunduwa have lost their jobs due to the trawling ban,” said former chairman of the Kalpitiya Day and Multi-Day Fishing Cooperative Society, KLB Lietan.

According to him, 51 boat operators were granted permission to trawl on identified land in Kudaramalai in the 1980s, but today they are deprived of their livelihood.

“Some varieties of shrimp could only be caught by trawl. Fishermen have learned trawling methods that do not affect the seabed through a foreign-funded project,” Lietan said. Representatives of the Fishermen’s Association said they were unhappy with the wave of destruction of the country’s aquatic resources by ruthless elements. “Promoting tourism at the expense of the environment is not sustainable. The importance and sustainability of the marine economy, also known as the blue economy, has been underpinned by the United Nations Sustainable Development Goals,” said representatives from the National Fisheries Association.

Directing sewage from apartments, drawing telecommunication cables across coastal areas, preventing cage culture for fishing at Bolgoda Lake to promote tourism have been reported as some of the destruction caused to life marine and the obstacles to maintaining the fishing industry. Representatives of fishing unions calling for urgent changes to the laws relating to the fishing sector to end the exploitation of the country’s marine resources by foreign fishing vessels said that the current legislation governing fishing serves the interests foreign entities exploiting the seas within the country’s borders. .

The Fisheries and Aquatic Resources Act No. 2 of 1996 was the fisheries legislation limited to Sri Lankan waters. This has provided the legal basis for the management, conservation regulation and development of Sri Lanka’s fisheries and aquatic resources. This local legislation was reinforced by a series of regulations drawn up under the same law.

Representatives of the Fisheries Association have also said that the fishing industry cannot be sustained for long as the next generation is unwilling to continue the ancestral occupation. “Those who are currently engaged in the industry are those over 50 and they will soon be retiring,” said a representative of the Fishermen’s Association. On speculation of a spike in fuel prices, members said prices should be maintained at current levels rather than increased, which would further burden fishers who have yet to settle their loans. Fishermen across the country were in dire straits over the past year as the pandemic halted transportation and travel, causing a sharp drop in sales. The fisheries sector has over 300,000 direct beneficiaries and over one million indirect beneficiaries who contribute around 1.5% to GDP.