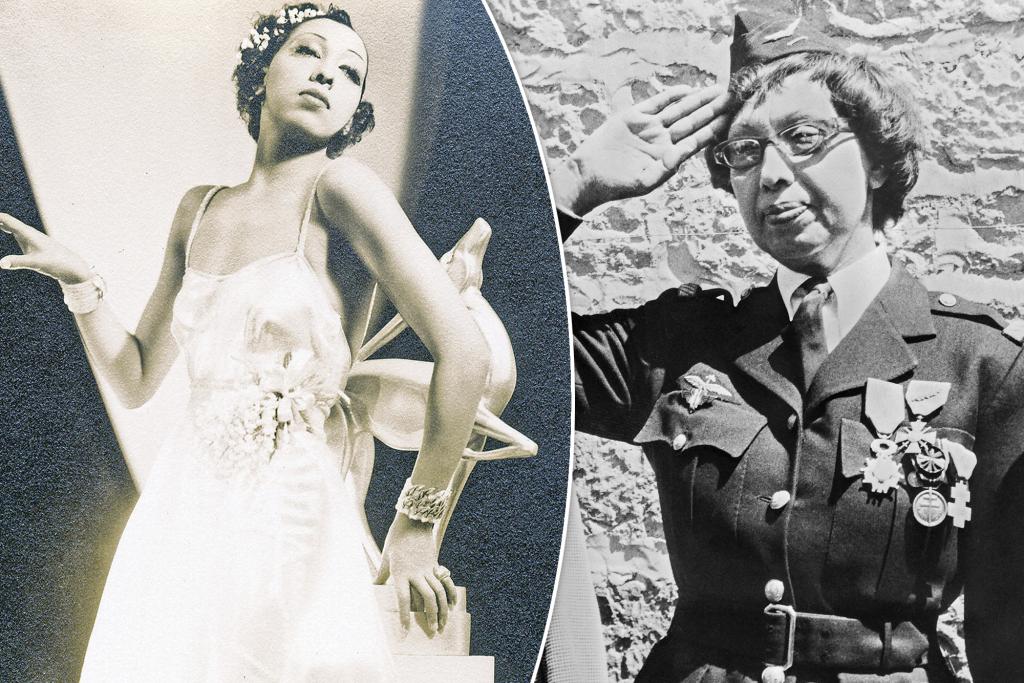 As Josephine Baker passed through international checkpoints in Spain and Morocco, the dancer and singer teased officers who asked to see her papers, saying they just wanted her “autograph”.

Her official story was that she was on a “tour of Spain”. She was really working as a spy for the resistance, with state secrets carefully hidden in her bra.

Baker took a gamble that no one would dare strip search her. She smiled her famous smile – she was the most photographed woman in the world at the time – as the documents remained “well in place, secured by a safety pin”.

Baker’s role as one of the true heroes of World War II, fighting the Nazis at the risk of his life, is detailed in the new book “Agent Josephine: American Beauty, French Hero, British Spy” (PublicAffairs ) by Damien Lewis. In 1961, she was awarded a Legion d’Honneur, France’s highest decoration for military service, for her mission in Spain and Morocco, and was praised for recovering “precious information”.

Born in Saint-Louis in 1906, Joséphine Baker moved to France at the age of 19. She emigrates with the hope of leaving behind the racism that hinders her American aspirations. She quickly became famous for her singing and dancing, including her beloved number where she wore nothing but a skirt made out of rubber bananas. She became friends with French luminaries like the writer Colette. She bought a castle, wore dresses from the most exclusive designers and often walked the streets with her pet cheetah, Chiquita, who wore a diamond necklace.

And for a while she was treated the same way.

Once, when a visiting American who saw her dance at the Folies Bergère theater remarked, “At home, a woman belongs in the kitchen,” the audience fell silent in horror.

“You are in France,” the director replied curtly, “and here we treat all races the same.”

But dark forces were rising in Europe.

In 1925, when Hitler’s “brownshirt” stormtroopers were still considered a fringe group, Baker performed in Berlin to thunderous applause. When she returned two years later – after Hitler had risen to prominence with the publication of his book “Mein Kampf,” which denounced black people as “half-apes” – the response was very different. Headlines in German and Austrian newspapers denounced her as a “black devil” and a “jezebel”.

“How dare they put our beautiful blonde Lea Seidl on stage with a negress? asked one newspaper, while another claimed ‘this colored girl’s convulsions’ would undermine Dresden’s sense of dignity. The crowds were such that Baker feared for his life.

Ten years later, Baker’s face graced the cover of a 1937 pamphlet denouncing decadent artists published by Joseph Goebbels, the Nazi Party’s leading propagandist. That same year, Josephine married the Jewish industrialist Jean Lion. Her passion for fighting the Nazis – and for defending her adopted country and her husband, as well as herself – reached a fever pitch. In 1938, she declared that the Nazis were criminals and that “criminals must be punished”. She claimed that she would kill them with her own hands if necessary.

That same year, she was approached by the Second Bureau as an honorable correspondent, a volunteer position that involved retrieving intelligence for the bureau. It was entirely unpaid, as was typical for such a role. Throughout the war, Josephine refused to accept money for her work and sometimes resorted to selling jewelry and other goods to help fund her excursions.

Shortly after beginning to work as a spy, Baker learned from friends at the Japanese Embassy that Japan had signed a secret anti-Communist pact with Hitler. It was the first of many pieces of information she passed on to the office. Soon after, she informed the office that – through friends at the Portuguese Embassy – she had learned that Germany planned to occupy neutral Portugal to use its ports. She quickly became one of France’s most valuable assets. Espionage gave Baker the ability, as Lewis put it, “to fight back, without necessarily needing to draw blood.”

When war came to France in 1940, Josephine’s glamorous country home – the Château des Milandes in the Dordogne – became a base of operations for local resistance members, as well as refugees, including a Jewish couple. Belgian that Baker sheltered there. . A radio transmitter was installed on the tower for contact with Brittany, and the cellar was filled with weapons for the resistance. When German soldiers stopped to investigate after receiving a tip-off, Baker assured them she was just a dancer.

However, she pointedly informed them, “I wouldn’t have the heart to go on stage when there’s so much pain.” In fact, Baker performed on stage throughout the war — she just wouldn’t perform for the Nazis.

As a star performer, Baker had coverage that allowed him easy travel to other countries – from Portugal to Spain to Morocco – something most people couldn’t get visas for during the season. ‘occupation.

“I come to dance, to sing,” she told journalists abroad who asked her why she had left France. She had in fact come to carry missives, photos and documents which could be useful to the allies, and to meet the sympathizers of the cause of the resistance. She carried sheet music with information written in invisible ink regarding enemy defense positions in southwestern France. She stuffed notes on other important details of her lingerie. Fellow agents traveled with her, posing as her “tour manager”.

Throughout the war, she worked with “Berber chiefs, chiefs from the Rif [from the Northeastern region of Morocco], Arab dignitaries, black and white American troops, (former) Vichyites, plus the Free French forces. Even when his friends were murdered by the Nazis or sent to concentration camps, Baker kept his cool. When she performed for American troops in northwestern Algeria, she survived enemy fire by diving near the buffet tent. A Texas soldier crawled on all fours with a bowl of ice cream for her, which she happily ate.

Then she joked, “Me, belly down, among soldiers from Texas, Missouri and Ohio in my Parisian 1900 dress, it must have been an irresistibly funny sight. Mainly because I kept eating.

After the war, Josephine returned to Germany again in 1945. This time she was honored at the Allied Victory Ceremony at Hohenzollern Castle, the historic home of the German royal family. She took the place of honor in a country that had degraded and ridiculed her a few years before. Then she performed for Buchenwald death camp survivors who were too weak to leave prison. Although the camp is riddled with typhus and still littered with bodies, and Baker is in failing health, she still finds the strength to sing a number called “In My Village” about the simple pleasures of home.

Even after France was liberated from the Nazis in 1944 and the war ended the following year, Baker never stopped fighting for equality for all.

“She would never forget the lesson of the war years: freedom must be fought for, every day,” Lewis wrote.

She died in 1975 at the age of 68. As she danced until the eve of her death in a revue at the Bobino theater in Paris celebrating 50 years in show business, she says “the war years” had been the highlight. of his life.

“I gave my heart to Paris, as Paris gave me hers,” she said on stage during the Revue’s opening night.

In 2021, she received her greatest honor – admission to the French Pantheon, which recognizes only the greatest figures in French history, such as Voltaire, Victor Hugo and Marie Curie.

She is one of only five women to win a place there.

2022-07-16
Previous Post: Sri Lanka begins election process for new president after Rajapaksa steps down
Next Post: The Power of Global Relocation: How Talent Mobility Can Shape the Future of Economies