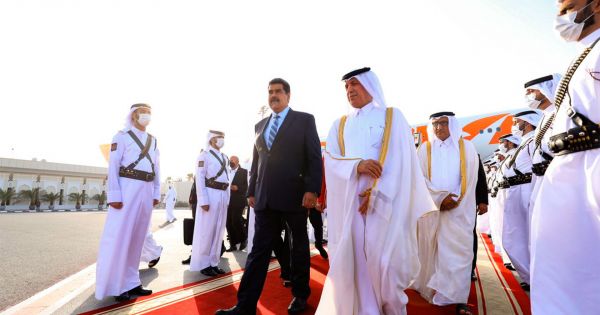 Maduro meets with Emir of Qatar to boost bilateral ties

Venezuelan leader Nicolás Maduro held a meeting on Wednesday with the Emir of Qatar Tamim bin Hamad al Thani in Doha, during which cooperation in “the fields of energy, economy, investment, agriculture and tourism” was discussed, according to local media.

Maduro is on an international tour, which included stops in Turkey, Algeria, Iran and Kuwait.

Al Thani and Maduro reviewed “the relations of friendship and joint cooperation, and the prospects of expanding them for the benefit of the peoples of the two countries”, the official Qatari news agency QNA reported.

The meeting focused on cooperation in “the areas of energy, economy, investment, agriculture and tourism, in addition to exchanging views on the issues most important to the regional and international levels,” QNA added.

It was Maduro’s third official visit since 2015 to Qatar, a country not aligned with the Organization of the Petroleum Exporting Countries (OPEC) and one of the world’s biggest gas-supplying powers.

Maduro said the purpose of his visit was “to strengthen and extend to the highest level the relations of union and complementarity”, and hoped that “a fruitful and successful agenda awaits us”, according to his Twitter account. official.

“From Qatar, the fifth country we have visited on the course of our Bolivarian peace diplomacy, we are working to build the map of cooperation for the well-being of the Venezuelan people and for the union and brotherhood among the nations. We do everything out of love for the country. Maduro posted on social media.

He began his current international tour on June 7. He has signed agreements “in the fields of science and technology, agriculture, transport, energy, tourism and culture”, notably with Iran, where Supreme Leader Ali Khamenei praised the “resistance” of Venezuela against the United States, and sealed a 20-year strategic cooperation agreement, which provides for cooperation between the two countries in the sectors of oil, petrochemicals, tourism, food and technology.