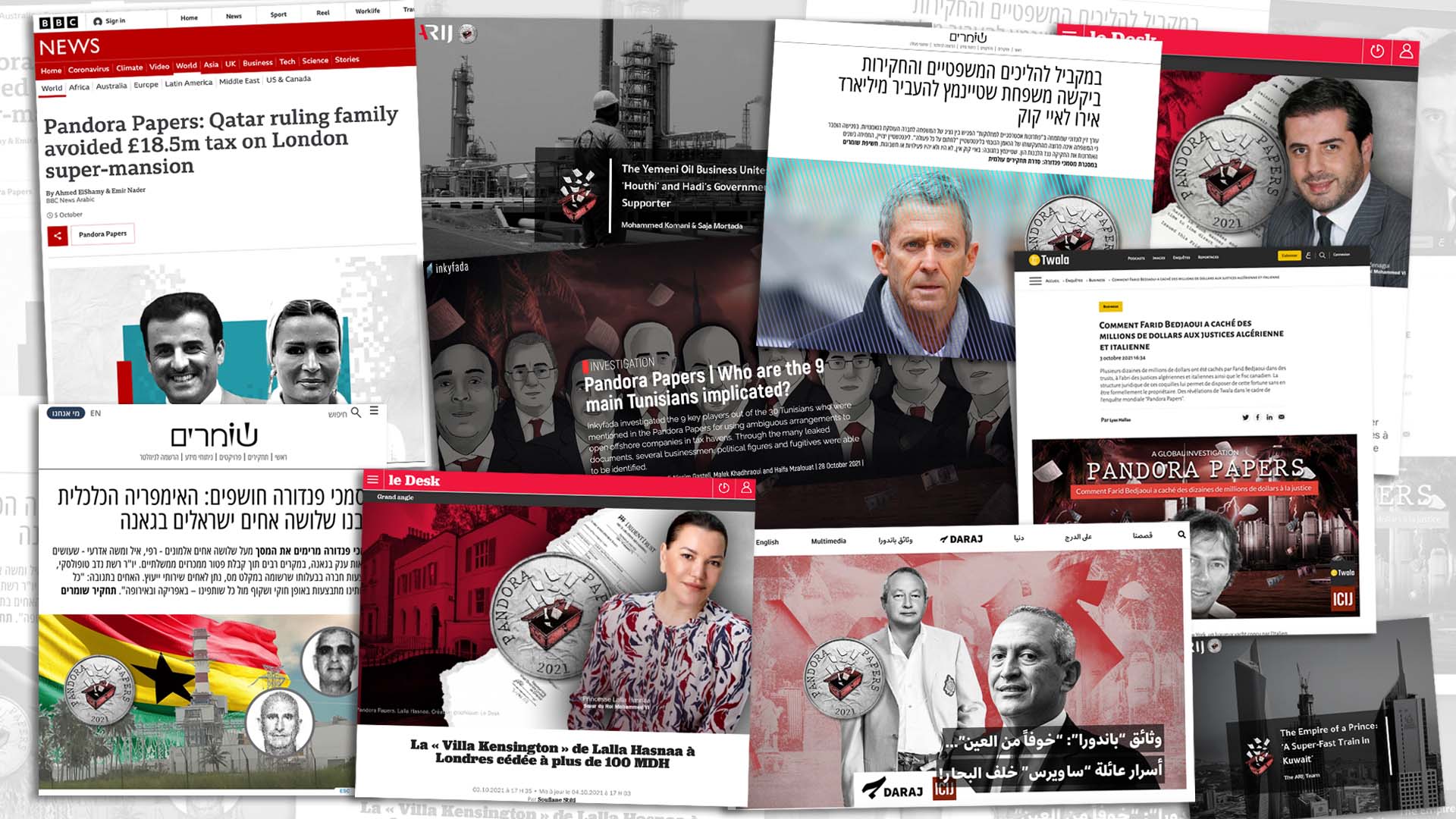 Pandora Papers Reports on the Middle East and North Africa

Since October, journalists from the Middle East and North Africa have published articles based on a mine of nearly 12 million leaked documents exposing the grim offshore financial system that allows the rich and powerful to get rich, often at the expense of the public.

These documents, which come from a group of 14 offshore service providers with offices around the world from Samoa to South Dakota, are the basis of the Pandora Papers, an investigation by the International Consortium of Investigative Journalists. and a global network of reporting partners. .

The survey highlights the rise of the UAE as a major offshore center in the financial world. Five of the companies at the heart of the Pandora Papers have offices in Dubai.

Here are some highlights from Pandora Papers of ICIJ partners in the Middle East and North Africa.

Algerian news agency Twala reported on Farid Bedjaoui, the nephew of a former government minister, who detained millions of dollars in assets beyond the reach of Algerian and Italian authorities, in New Zealand-based trusts and shell companies registered in his brother’s name.

Bedjaoui had previously been named in the Panama Papers investigation, which found he had used a group of offshore shell companies, many of which were created by Panamanian law firm Mossack Fonseca, to facilitate bribes. $ 275 million wine between the Algerian government and an Italian energy company to win lucrative pipeline contracts.

Bedjaoui, who earned the nickname “Mr. 3%” for the cut he allegedly took for himself, was acquitted of criminal charges in Italy in 2020, but the Italian energy company – which was also acquitted of the criminal charges – settled with the Securities and Exchange Commission for $ 24.5 million.

In Egypt, the Arabic Reporters for Investigative Journalism network found that Fleet Energy, a company owned by oil tycoon Magdy Rasikh, was given permission to import natural gas into the country and supply it to homes and businesses – despite Rasikh being convicted in absentia on charges that he and a former government minister had heard to embezzle public funds.

Israeli media center Shomrim reported Billionaire film producer Arnon Milchan’s holdings in the British Virgin Islands. Milchan, who was related to Fraud charges filed against former Israeli prime minister Benjamin Netanyahu, is the beneficial owner of offshore companies that have purchased luxury real estate in New York and Malibu and hold hundreds of millions of dollars in works of art and antiques.

Shomrim also uncovered documents indicating that the family of mining magnate Beny Steinmetz was looking to move over a billion dollars from funds in Liechtenstein to the Cook Islands and reports of three brothers who used companies registered in the British Virgin Islands winning public contracts in Ghana.

ARIJ also reported the sons of a late Kuwaiti Emir, who own “one of the greatest economic empires in Kuwait, the Gulf and possibly even the Middle East“, despite a long tradition that the ruling family does not engage in private affairs.

Daraj Media, another multinational Arab reporting network, investigated Lebanese banker and former government minister Marwan Kheireddine, who started businesses in the British Virgin Islands at a time when a financial collapse wiped out the savings of many Lebanese citizens like Wafaa bu Hamdan, a 57-year-old widow who told Daraj she lost the equivalent of $ 60,000 .

Daraj also reported a rich Egyptian family with millions of dollars tied up in offshore accounts and Lebanese businessmen named in the Pandora Papers that were accused of helping to finance Hezbollah.

Moroccan newspaper Le Desk discovered that Lalla Hasnaa, sister of King Mohammed VI, used a company based in the British Virgin Islands, Oumaila Limited, owning a home in upscale Kensington, London. She sold the house for more than $ 10 million at the end of 2020, and it is not known if any of that money was repatriated to Morocco.

The Desk also reported on Hugo Yassir Zenagui, a former government minister who used his French passport to create a company in the Seychelles, and Faïçal Mekouar, the managing partner of the Moroccan subsidiary of the international accounting firm Grant Thornton. Mekouar created a company whose shares were held by a Panamanian foundation, and this foundation paid dividends on the personal account of Mekouar in Spain

BBC News Arabic reported on Qatar’s ruling Al-Thani family, which used offshore companies buy two of the most expensive houses in the UK in a deal that allowed them to avoid more than $ 25 million in “stamp duty,” a tax imposed by the government on documents that legally record certain transactions.

The ARIJ discovered that officers from the Saudi Ministry of Defense used an offshore company to buy guns, including white phosphorus mortar shells, from a Serbian organization. Photographic and video evidence confirms that some of these weapons ended up in the hands of ISIS in Yemen.

In Tunisia, the independent media and design collective Inkyfada investigated nine of the key Tunisians named in the Pandora Papers – including Belhassen Trabelsi, the brother-in-law of the former dictator Zine El Abidine Ben Ali.

Inkyfada discovered that Trabelsi, who has been in exile since a revolution in 2011, was the sole shareholder of three companies established in Panama in 2016. Trabelsi had previously been named in the ICIJ’s Swiss Leaks survey.

In Yemen, ARIJ found documents showing that a key economic adviser to President Abdrabbuh Mansur Hadi is a co-owner of a company that carried out oil activities in territory controlled by the Houthi rebel group.

2021-12-01
Previous Post: Manchester City star Riyad Mahrez hails Said Benrahma’s brilliant form for West Ham this season
Next Post: What is it, how does it work