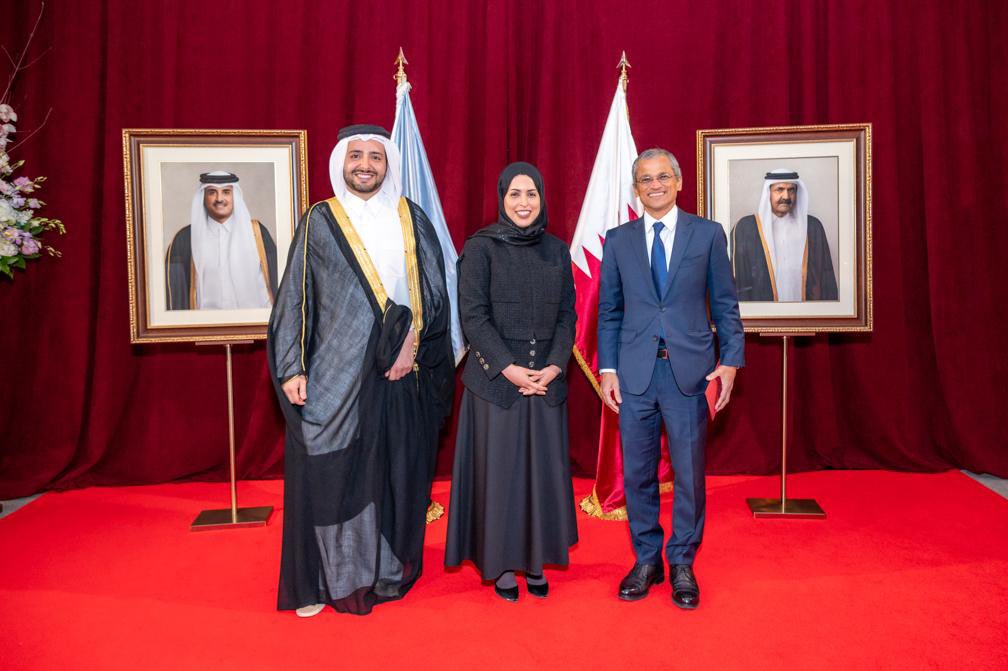 The Permanent Representative of Qatar to the United Nations, Ambassador HE Sheikha Alia Ahmed bin Saif Al Thani and Consul General in New York HE Mohammed bin Sultan Al Kuwari during the ceremony in New York.

Doha: The diplomatic, consular and representative missions of the State of Qatar continued the celebrations of the National Day, in commemoration of the founder of the State, Sheikh Jassim bin Mohammed bin Thani, under the slogan: “Ancestral presidencies: an affair of confidence.”

Their Excellencies, Heads of diplomatic, consular and representative missions of Qatar abroad addressed their congratulations to Emir HH Sheikh Tamim bin Hamad Al Thani, to Father Amir HH Sheikh Hamad bin Khalifa Al Thani, and to all the Qatari people on this occasion, wishing the State of Qatar more progress and prosperity.

In New York, the Permanent Delegation of the State of Qatar to the United Nations organized a ceremony on the occasion of the State’s national holiday.

The celebration of National Day 2021 has acquired special significance, as it coincides with the global renaissance witnessed by the State of Qatar in various fields, and also coincides with the golden jubilee of the 50th anniversary of the accession of the State of Qatar to the UN. and the start of the countdown to the launch of the FIFA World Cup Qatar 2022, hosted by Qatar in November 2022, as the first World Cup in the Middle East and Arab World.

Permanent Representative of the State of Qatar to the United Nations, HE Ambassador Sheikha Alia Ahmed bin Saif Al Thani and Consul General in New York HE Mohammed bin Sultan Al Kuwari welcomed the sympathizers of the Ambassadors, heads of diplomatic missions of the States members, senior UN officials, heads of intellectual institutions, academics, diplomats, journalists, economic and social figures from New York and from the Arab and Islamic communities.

In a speech, Sheikha Alia Ahmed bin Saif Al Thani welcomed the participants and the President of the 76th United Nations General Assembly, HE Abdullah Shahid, the guest of honor of the National Day celebration. She stressed that 2021 is of particular importance for Qatar, as the country is witnessing, under the leadership of Emir HH Sheikh Tamim bin Hamad Al-Thani, a developmental and scientific renaissance in all fields, and the status of the The State of Qatar has strengthened internationally, moreover, that this year marks the 50th anniversary of Qatar’s membership in the UN.

She stressed that Qatar will host the first ever environmentally friendly FIFA World Cup in the Middle East, which reflects the spirit of coexistence and the values ​​of peace and love among human beings.

He said Qatar had become an economic power and a regional and international mediator, welcoming Qatar’s national vision for sustainable development by 2030, and said it was a bold vision that defines a comprehensive framework that meets the needs of current and future generations.

The President of the UNGA praised Qatar’s investment in creativity and innovation to achieve the Sustainable Development Goals by 2030. He also praised the role of the State of Qatar within the UN and its position within the international organization.

Minister of State for Foreign Affairs of India HEV Muraleedharan attending the reception hosted by the Embassy of Qatar in New Delhi.

In New Delhi, the Qatari Ambassador to India, HE Mohammed bin Khater Al Khater, hosted a celebration on the occasion of the National Day.

The ceremony took place in the presence of the Minister of State for Foreign Affairs of India, HE Mr. V. Muraleedharan, a number of officials from the Ministry of Foreign Affairs, political and intellectual figures, and politicians. affairs and a number of heads and members of diplomatic missions accredited to New Delhi.

During the ceremony, videos on the State of Qatar and preparations for the World Cup were shown, in addition to decorating the facade of the University of Tirana with the Qatari flag throughout the day and d ‘light up the sky in the center of the Albanian capital, Tirana, by launching fireworks in the colors of the Qatari flag. 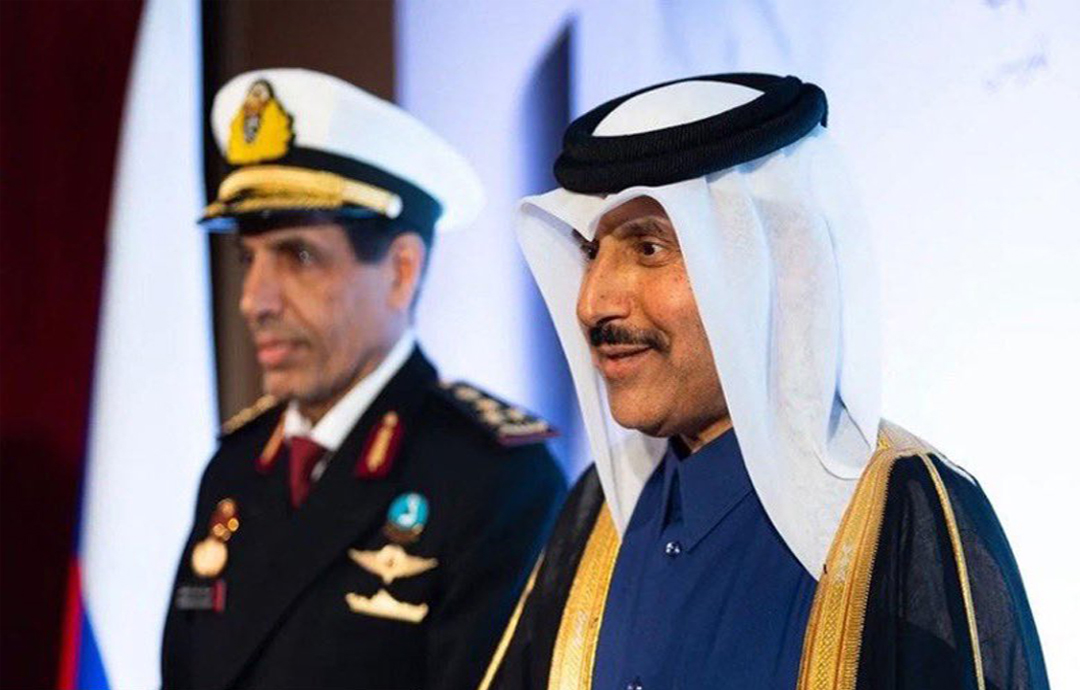 Officials during the celebrations in Moscow.

In Moscow, the Embassy of Qatar to the Russian Federation organized a ceremony on the occasion of the national holiday. The ceremony took place in the presence of the Deputy Minister of Foreign Affairs of the Russian Federation, HE Mikhail Bogdanov, as guest of honor, as well as several senior Russian officials, Their Excellencies the ambassadors and representatives of the missions diplomatic representatives accredited to Moscow. 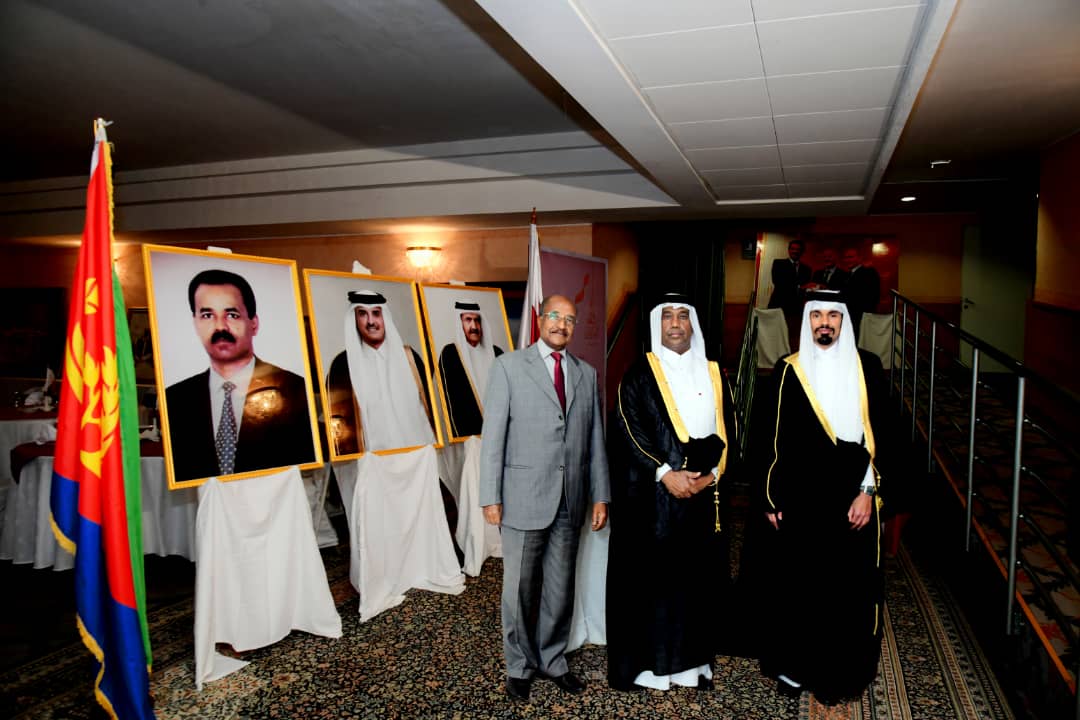 The Embassy of Qatar celebrated the national day in Asmara, in the presence of the Eritrean Minister of Foreign Affairs, HE Osman Saleh, ministers and a number of senior officials.

In Asmara, the Embassy of Qatar in Eritrea celebrated the national day. The ceremony was attended by Minister of Foreign Affairs HE Osman Saleh, Minister of Information HE Yemane Ghebremeskel, Minister of Justice HE Fozia Hashim, Minister of Tourism HE Askalu Menkerios, and a number senior officials and heads of state, diplomatic missions, members of the diplomatic corps accredited to Asmara, and many eminent personalities. The charge d’affaires of the Embassy of Qatar in Eritrea Khalifa bin Thani Al Zarraa, drew attention to the role of Qatari diplomacy in building strong bridges with influential powers in the world, highlighting the role of the He State of Qatar has become a strong and fair mediator in the settlement of disputes by peaceful means, which has strengthened its status and influence at the regional and international levels.

He said the State of Qatar completed the infrastructure projects of giant sports facilities, highways, transportation and connecting bridges, ahead of the date set for the 2022 Qatar Football World Cup. , and with great success that exceeded all expectations.

He stressed that Qatar has made a big leap in the industrial and agricultural field in order to achieve self-sufficiency and access to world markets, especially after having exploited the seaport of Hamad, and increased the volume of Qatari exports to various countries. of the world.

In Zagreb, the Embassy of the State of Qatar in the Republic of Croatia organized a ceremony on the occasion of the National Day. Qatar’s Ambassador to the Republic of Croatia, HE Sheikh Mohammed bin Youssef Al Thani, attended the ceremony, which was reserved for embassy diplomats due to precautionary measures related to COVID-19.

In a speech on the occasion, he said that Qatar today occupies a prestigious regional and international position due to its efforts to achieve peace and stability and its support for development and prosperity in partnership with international actors.

The Croatian capital Zagreb decorated the most famous fountain in the city center, with the image of the Qatari flag, as part of its participation in the celebrations on this occasion, which expresses the strength and depth of the relationship between the two friends countries and peoples.

In Algiers, the Embassy of Qatar in the People’s Democratic Republic of Algeria celebrated the National Day. The ceremony took place in the presence of the Algerian Minister of Transport HE Issa Bakay, the Minister of Relations with the Parliament HE Bessma Azouar, the Secretary General of the Ministry of National Defense, Major General Mohamed Saleh Benbicha, several representatives of state agencies, heads of mission and international organizations. accredited in Algeria, businessmen, intellectuals, artists, media professionals, lawyers and several public figures.

In Tbilisi, the Embassy of the State of Qatar in Georgia celebrated the State’s National Day. The ceremony took place in the presence of the Ambassador of the State of Qatar to Georgia HE Hassan bin Ahmed Al Mutawa, Deputy Minister of Foreign Affairs HE Alexander Khvtisiashvili, Head of the Department of Middle East Affairs of the Georgian Ministry of Foreign Affairs Zurab Aleksidze, ambassadors accredited to Georgia and several Qatari citizens in Georgia.

In Lisbon, the Embassy of the State of Qatar to the Republic of Portugal organized a virtual party on the occasion of the State’s National Day.

In a speech on the occasion, Qatar’s Ambassador to the Republic of Portugal HE Saad bin Ali Al Mohannadi praised the development and political achievements the country is witnessing, which has made Qatar a pioneering model and a vital contributor to the movement of growth and development at the regional level. and internationally.

He underlined the important role played by the State in the framework of international cooperation to meet the challenges of epidemics, climate, environment and education. He highlighted the strength, diversity and flexibility of the Qatari economy thanks to the policies, solid foundations and judicious actions taken by the state.

In Mogadishu, the Embassy of Qatar in the sister Federal Republic of Somalia hosted a ceremony on the occasion of the national day. The ceremony brought together a number of senior Somali government officials, led by Prime Minister HE Mohamed Hussein Robley, as well as ministers, representatives, civil society leaders and high-level social figures from all states of the countries, as well as a number of ambassadors. and representatives of international and regional organizations accredited to Mogadishu.

The guests expressed their admiration for the great achievements and progress made by Qatar in various fields. For his part, Ambassador to Somalia HE Hassan bin Hamza Hashem, in a speech on the occasion, drew attention to Qatar’s successes and progress in achieving its ambitious goals and strategies.