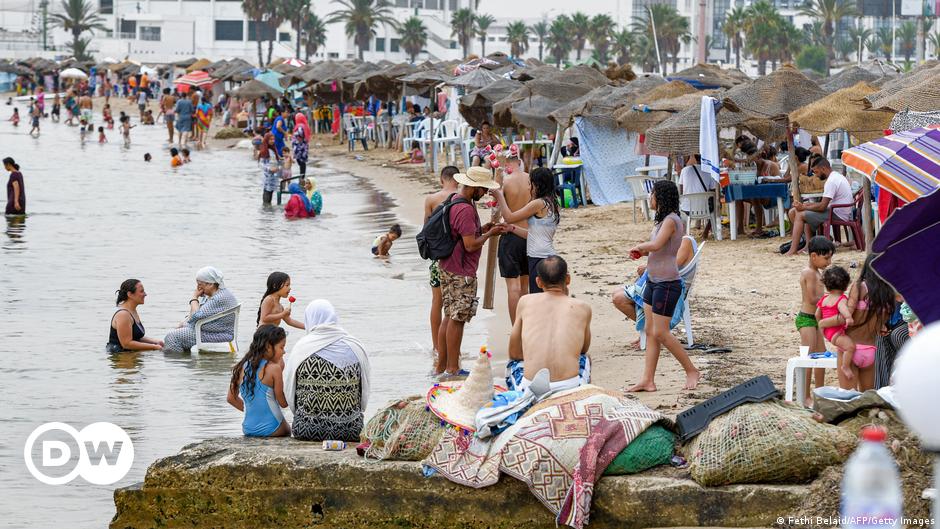 Over the past 15 years, fishermen in Ghannouch, a town about 400 kilometers (about 250 miles) south of Tunisia’s capital, Tunis, say they have seen “radical changes” to the coastline they skirt.

“The sand is diminishing and the rocks are starting to show up,” Sassi Alaya, a local sailor and head of the South Harbor Fishermen’s Guild, told DW. “It is a double problem because the coasts of the state of Gabès already suffer from environmental pollution due to the chemical factories in the region. This greatly affects the work of small fishing companies”.

“There are now black spots around the coasts,” added Mounir Kcherem, a fisherman from the neighboring island of Kerkennah. “There are huge differences between the coast today and that of 20 years ago,” he said. “Although this phenomenon is still confined to specific locations around the island.”

The fishing families of southern Tunisia are not the only ones facing such changes. A recent World Bank study that looked at the economic consequences of coastal erosion in this region found that countries like Tunisia, Morocco, Libya and Algeria were losing their beaches faster than almost anywhere else in the world. world.

Faster than the world average

It can be difficult to determine how much coastline has been lost in a single country because coastlines gain and lose sand, so national averages can be misleading. But it was when World Bank researchers used more detailed data and satellite imagery from the European Space Agency and the National Center for Oceanography in the UK that it became clear just how much the Maghreb coastline was threatened in some areas.

About 700,000 people are employed by the fishing sector in Morocco

For example, between 2006 and 2019 in Hammamet, a popular tourist town just south of the country’s capital, Tunis, beach area was halved. This equates to a loss of around 24,000 square meters or between 3 and 8 meters each year, the experts have calculated.

World Bank economists have also tried to calculate the value of these losses by calculating the value of land and infrastructure lost on the coast. They found this would equate to around 2.8% of gross domestic product (GDP) in Tunisia, 0.7% in Libya, 0.4% in Morocco and 0.2% in Algeria. In total, that would have been around $2.46 billion (€2.42 billion), based on the national income of those countries from 2021.

However, as the researchers also noted, “these costs are lower because they do not incorporate other values ​​such as lost tourism revenue.”

Coastal erosion also has another ripple effect: as salt water encroaches on land, it begins to pollute fresh groundwater, making it saltier. Brackish water cannot be used for drinking or agriculture.

The potential impact of coastal erosion on sectors like tourism and fishing is like a “socio-economic bomb” ready to explode, the authors of an article published by HydroSciences Montpellier, a special laboratory of the University of Montpellier in France which focuses on the water resources of the Mediterranean. , said.

“Climate change amplifies other threats and exacerbates underlying vulnerabilities and social risks,” Lia Sieghart, World Bank practice manager for environment and natural resources for the Middle East and Middle East, told DW. North Africa. “Marginalized social groups are particularly vulnerable to the impact of climate change. This is why political stabilization and action against climate change go hand in hand.”

The situation in the Maghreb countries is also more precarious due to the number of inhabitants living on or near the coast. It is estimated that 40% of the total world population lives near the sea. 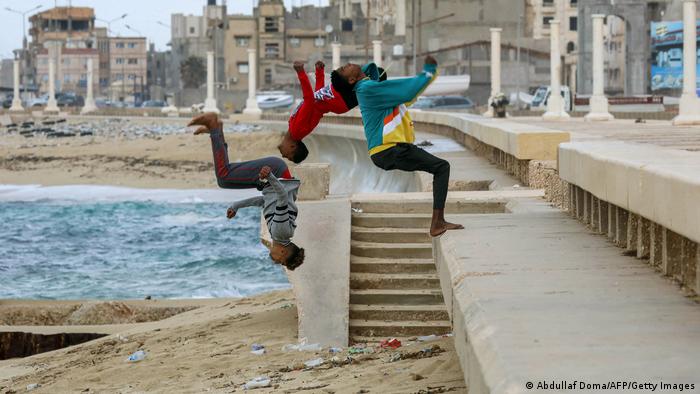 About 80% of Libyans live in urban centers, most of which are located on the country’s coast

However in Morocco, the percentage of inhabitants living near the coast is 65% and in Tunisia it is around 85%. Many large Maghreb cities are located on the coast and in Tunisia, for example, it is estimated that 90% of the country’s economic output occurs by the sea.

In fact, increasing urbanization and population pressure on coasts may well be one of the many reasons for faster coastal erosion. Buildings and humans crowd out natural features that tend to protect against erosion, such as wetlands, plants, and sand dunes.

Another major reason for the disappearance of beaches is obviously rising sea levels. But, as experts told DW, the real reason why Maghreb countries are experiencing some of the worst coastal erosion in the world could actually be much further inland.

“If there is a difference between the Maghreb and the countries of the northern Mediterranean, I think it is in the number of dams and the number of rivers”, explained Gil Mahe, director of research at the Laboratory of hydrosciences from Montpellier, France, who currently works at the Institut National des Sciences et Technologies de la Mer, or INSTM, in Tunisia. Erosion happens faster here because “there are not many rivers and many dams”, Mahé said. 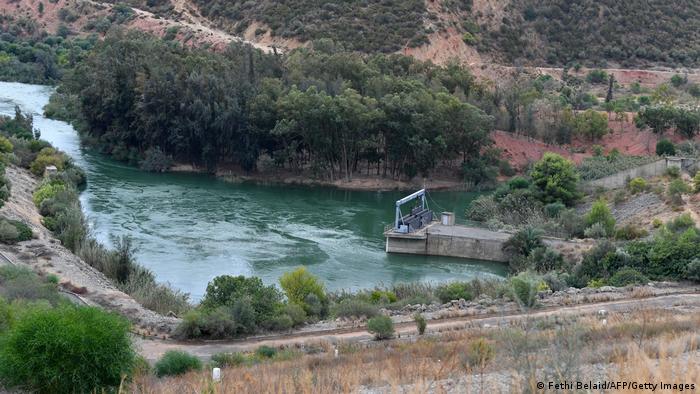 Studies in Tunisia, Algeria and Morocco investigating the history of sedimentation near where rivers reach the sea have shown that where there are large dams, not enough sand reaches the coast. , explained Mahé. The natural geomorphological functioning of a coast would see the sand come to swell the coast, then it would be carried towards the sea by the marine currents.

Pressure on land and at sea

But the Maghreb coast is under pressure from two elements of climate change. Warmer temperatures cause sea levels to rise, encroaching on beaches. It also makes extreme weather events more frequent, which can damage the coastline with, for example, flooding, huge waves and wind.

At the same time, a warming planet also has less rain, which means that local authorities in North Africa are trying to store fresh water wherever they can, in order to supply it to this coastal population. always growing. This requires more dams. 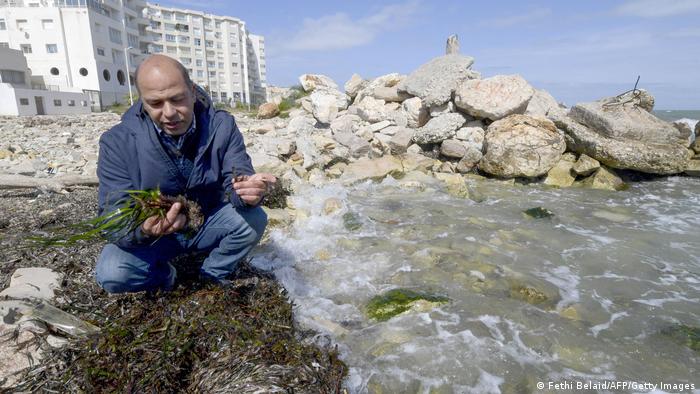 Natural buffers against erosion, such as seagrass, are considered the best way to protect coastlines

It looks like a vicious circle. But Mahé, who is working on various plans to better manage the Tunisian coastline and make local authorities understand the exact issues, has some hope. While sea level rise is now inevitable, he said, there are many ways to minimize harmful human impacts and better protect coasts and cope with what is coming. until humans and nature “reach a new balance,” he explained.

Experts like Mahé and those at the World Bank recommend what they call “integrated coastal management plans”. These can include everything from a higher tax on coastal construction and real estate, to renovating inland dams that allow more sand and sediment to flow to the coast, to the erection of wind fences on the dunes or the replanting of plants.

The World Bank is supporting some of these plans in the Maghreb, the organization’s Sieghart said. “It is true that no country can fight climate change alone,” she said. But, she added, local responses are still crucial because “they can help adapt to and mitigate the impacts of climate change.”

2022-07-20
Previous Post: EXPLANATION: Can Europe live without Russian natural gas?
Next Post: How will the sinking of the euro affect Arab economies?