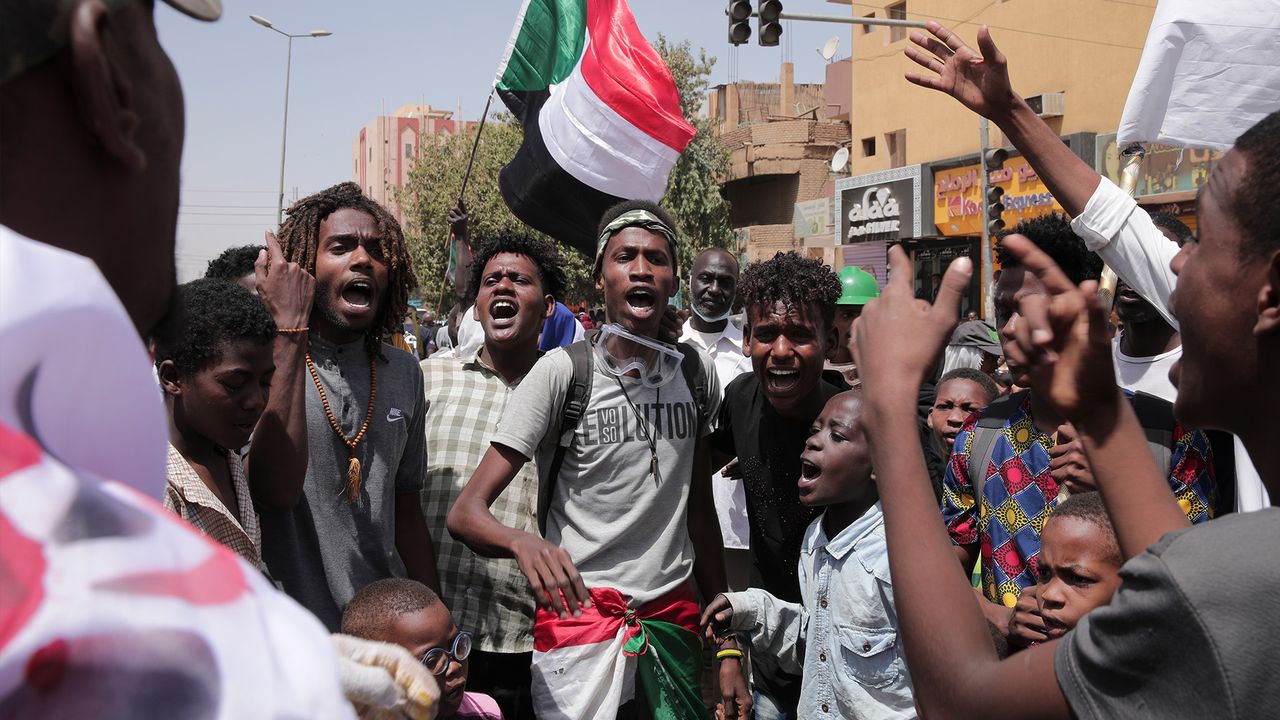 Thousands of workers and students have taken to the streets of cities across Sudan to protest against soaring food and fuel prices. Food prices are 100-200% higher than a year ago and inflation is 250%.

In the capital Khartoum last week, protesters were met with tear gas and stun grenades as they approached within 200 meters of the presidential palace.

The mass protests follow the sharp fall in the value of the Sudanese pound over the past month as the military junta ended its fixed exchange rate policy, and are taking place alongside ongoing strikes by teachers and teachers. Atbara railway workers about their extremely low wages.

Nearly half of Sudan’s 44 million people will face hunger this year following the military ousting of Prime Minister Abdalla Hamdouk last October, according to the United Nations’ World Food Program (WFP). (prompting international financial institutions to suspend billions of dollars in budget support), the war in Ukraine and the sanctions imposed on Russia.

The WFP says around 20 million people are likely to be in “emergency” or “crisis” levels of “acute food insecurity”, double the figure for 2021. The situation has worsened significantly due to soaring world grain prices, shortage of foreign currency and drought in parts of the country, fueling the escalation of the protest movement demanding an end to military rule.

Like many countries in Africa, Sudan sourced around 35% of its wheat imports in 2021 from Russia and Ukraine and now has to find another supplier demanding much higher prices. Last year, Russia and Ukraine accounted for nearly a third of global grain exports, a fifth of its corn trade and almost 80% of sunflower oil production. According to the US Department of Agriculture, global wheat supplies will tighten, with exports from Russia and Ukraine likely to be 7 million tonnes lower than pre-war forecasts.

As a result of the war provoked by the United States and NATO, exports from Russia and Ukraine have come to a virtual standstill due to the sanctions imposed by Washington and the European powers on banks, ships and companies. Russian airlines and Ukraine’s ban on grain and other food exports to prevent a domestic humanitarian crisis. Northern Black Sea ports, where some of the most destructive fighting is taking place and through which most grain exports from Russia and Ukraine are shipped, have closed, while flight bans force planes -cargoes to divert from Russian airspace. This has exacerbated already rising food prices due to pandemic-related supply chain issues and deepening poverty.

The northern Black Sea region exports at least 12% of the world’s traded food calories, while 45% of Ukraine’s exports – Ukraine has a third of the world’s most fertile soils – are linked to Agriculture. Since part of Ukraine’s exports are used for animal feed, the export ban and disruptions will likely have an impact on livestock. Farmers fleeing fighting and the destruction of infrastructure and equipment by war threaten the April planting season.

According to the International Monetary Fund (IMF), the price of wheat rose by 80% between April 2020 and December 2021 as the pandemic took hold, pushing food prices to their highest levels since the 1970s. Wheat prices have jumped 37% and corn 21% so far in 2022. Wheat futures are 80% higher than six months ago and corn is up 58%.

Twenty-three of Africa’s 54 countries depend on Russia and Ukraine for more than half of their commodity imports. Some countries are even more dependent: Sudan, Egypt, Tanzania, Eritrea and Benin import 80% of their wheat and Algeria, Sudan and Tunisia more than 95% of sunflower oil from Russia and Ukraine. They too see higher prices across the board, exacerbating hunger in conditions where most African elites provide no social safety net.

The cost of living will skyrocket, especially in countries that import most of their food and where the economic effects of COVID-19 are hitting hardest: Nigeria, Kenya, Ghana, Rwanda and the United States. ‘Egypt. This is expected to double the number of people facing hunger in Africa, which is expected to reach over 500 million out of Africa’s 1.2 billion people.

The dangers are particularly acute in Egypt, the world’s largest wheat buyer and the largest wheat importer from Russia and Ukraine, accounting for 80% of total imports. About 30 million of Egypt’s 104 million live on less than $1.50 a day and more than 70 million depend on government-subsidized imports for their bread and vegetable oil.

The government has banned the export of wheat, flour and other commodities, which will precipitate a sharp rise in prices and impact countries like Yemen, which are already facing the world’s biggest humanitarian crisis. Last year, President Abdel Fatteh el-Sisi announced he would increase subsidized bread prices. With Egyptian bread subsidies already costing $3.2 billion a year, the finance ministry estimates it will need to budget an additional $763 million in 2021-22.

Last July, the government cut subsidies for sunflower and soybean oil by 20% and unblended vegetable oil by 23.5%. This week, Prime Minister Mustafa Madbouly set the price of unsubsidized bread at 11.5 Egyptian pounds, up 25%, as the currency fell 14% against the dollar following the war in Ukraine.

Libya, which depends on Ukraine for more than 40% of its wheat imports, has seen the price of wheat and flour increase by up to 30%. According to the WFP, even before the invasion of Ukraine by Russia, 12% of Libyans, or 511,000 people, would need food aid in 2022. There are also 635,051 migrants, asylum seekers and refugees in Libya, a quarter of whom are considered moderately or severely food insecure. These horrific figures bear witness to the devastation wrought by NATO’s 2011 war against what was a middle-income country.

South Sudan, torn by civil war and clashes between rival cliques for control of the country’s oil resources since independence in 2011, faces starvation with 8.9 million of the country’s 12 million people, including 680,000 people affected by floods since May 2021, who are expected to face hunger in the upcoming dry season.

In Ethiopia, fighting in and around northern Tigray province has displaced more than 2 million people. Most of the remaining four million Tigrayans do not have enough food and survive by cutting back on their meals, selling crops to pay their debts or begging. There are 454,000 malnourished children, more than a quarter of whom are severely malnourished, and 120,000 pregnant or breastfeeding women who are malnourished. The situation has been aggravated by the inability of the UN to deliver emergency food to Tigray since mid-December.

According to the WFP, 44 million people worldwide are on the brink of starvation and another 232 million are just one step behind. WFP has been hard hit as it receives half of the wheat it distributes in humanitarian crises from Ukraine. It must look to other suppliers at a higher cost amid massively increased demand from countries torn by wars and conflicts led or provoked by the United States, such as Afghanistan, Syria, Yemen , Ethiopia and Sudan, even as its funds from advanced countries plummet as resources. are diverted to Ukraine.

World leaders and analysts know that rising hunger will fuel social instability, migration and political unrest, just as the rising cost of living precipitated the Arab Spring in 2011. Last year, there have been five coups in West Africa. Only 22% of the continent’s 1.2 billion people have been vaccinated against COVID-19, while $100 billion in pandemic aid pledged by advanced countries has yet to be delivered. About 20 countries are massively indebted and on the verge of defaulting on international loans.

After three decades of wars led by the United States, the outbreak of a third world war, which would be fought with nuclear weapons, is an imminent and concrete danger.

2022-03-23
Previous Post: The future of industrial real estate: trends for 2022 and beyond
Next Post: Eni (E) makes a major onshore oil and gas discovery in Algeria