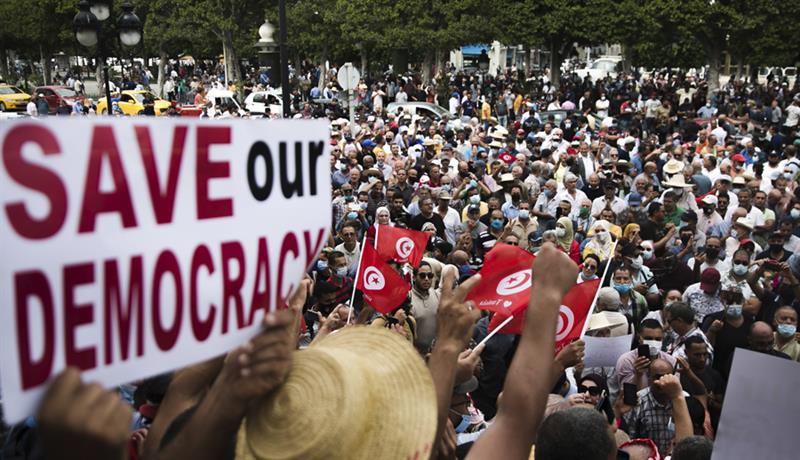 For Tunisia, 2021 was carefully marked by dramatic scenes that showed how the Arab Spring’s only success story could end.

Nationwide protests of anger over poverty, police brutality, the country’s political elite and a spiraling Covid-19 pandemic, followed by the startling announcement of an attempt to poison President Kais Saied and the power struggle between the president, prime minister and speaker of parliament, were a precursor to the implosion of Tunisia’s democratic transformation that lasted a decade a few months later.

In the height of Tunisia’s sweltering summer, Saied suspended parliament, lifted parliamentary immunity, sacked the prime minister and declared emergency measures amid a pandemic crisis that has nearly crippled the country. In September, he cemented his seizure of power by assuming executive and legislative powers and ruling by decree.

Speaking on behalf of the ‘people’, Saied vowed never to revert to the order of before July 25 when he froze parliament, accused his political opponents of treason and promised a ‘corrective’ movement to the uprising. Tunisian in 2011.

In a 40-minute televised speech on December 13, Saied announced a roadmap for change, setting dates for a referendum on constitutional changes on July 25 and parliamentary elections on December 17, 2022. He said the process would begin in January with online public consultations ending on March 20, Tunisia’s Independence Day.

As the former constitutional law professor turned strongman has become the sole face of Tunisian politics, scenes from the deadly December fire at the headquarters of the Ennahda Movement in Tunis, home of the country’s largest political party, provided a political metaphor for the country’s changing times.

The uproar raised the question that has been roaming the minds of many for months: is this the end of Tunisia’s decade of democratic transformation? Between pessimists, including critics of Saied, and supporters of the president, any answer to this question seems weighed down by uncertainty.

Today, Tunisia has no parliament, a partially enforced constitution and a president with unprecedented powers. That no longer makes it a democracy, but still does not qualify it as an authoritarian state, observers say.

Speaking during a recent Middle East Center webinar at the University of Oxford in the UK on “The Political Crisis in Tunisia: The End of Democracy?” Cherif cautioned against “black and white” interpretations of developments in Tunisia.

Rights groups have sounded the alarm bells at the proliferation of arbitrary and politically motivated acts of repression since Saied took power. According to the American NGO Human Rights Watch, three Tunisian deputies were jailed for speech offenses and at least 50 Tunisians were placed under arbitrary residence, including former officials, a judge and three lawmakers.

Dozens more have been subjected to arbitrary travel bans and authorities have shut down three television stations criticizing the president for not having obtained a license.

Yet Tunisians are still able to speak out openly in the public sphere, Cherif said, due to freedoms gained in the decade following the uprising against former Tunisian President Zine Al-Abidine Ben Ali.

The first demonstration against Saied’s measures took place in September, just meters from another demonstration in support of him in central Tunis. Since then, more anti-Saied protests have been organized, and they have significantly increased in size and political diversity.

The newly formed Citizens Against the Coup initiative, which staged the biggest protest in the past month, was denied permission to hold a press conference at a town hall.

“On a positive note, we see a civilian government, not a security government, or a government that responds to the political whims of this or that group,” Cherif said.

“There has been no bloodshed in the country (…) and no immediate threat to freedom of expression,” he added.

When the offices of the Qatari Aljazeera television station in Tunis were raided after Saied’s intervention in July, its reporters were still free to cover and travel around the country.

Likewise, when Tunisians against the coup could not hold a press conference in a hall, they could do so in the street, which gave them more publicity. There are regular anti-Saied demonstrations, and the main Tunisian union, the UGTT, has resumed industrial action without being harassed.

“Democracy has not ended in Tunisia,” Cherif said.

Saied was a barely known political outsider when he won the 2019 election in a landslide. In the presidential and legislative elections, Tunisian voters snubbed most of the country’s traditional political parties, resulting in a deeply fragmented parliament barely capable of consensus.

Saied’s popularity soared after his intervention in July, and according to Tunisian University of Oxford expert Anne Wolf, recent polls show an 80 percent satisfaction rate with his government.

“This is also due to his populist strategy of consolidating power,” Wolf said. “He presents himself as the leader of the Tunisian revolution who speaks on behalf of the people. “

Asked about his political project, Saied often replies that
“I want what people want. If he asked her the follow-up question what do people want, he would say “people know what they want,” she explained.

During his presidential campaign and long before his victory in 2019, Saied expressed his aversion to the political class and the democratic model of Tunisia. As an anti-establishment man, he envisioned an alternative form of democratic representation in which elected members of local councils would step into parliament.

Saied has always envisioned a powerful president for Tunisia, Wolf said, and he should not be underestimated.

“He causes confusion about his project because it saves him time – and when people are confused they don’t organize themselves so forcefully against him because they are always hoping that something positive will come out of it.” the crisis, ”she added.

On December 9, a statement from the Tunisian presidency declared that the Tunisian constitution of 2014 was no longer “valid”.

“The way forward is to get back to people in a whole new and different way. There must be a legal solution based on the will and sovereignty of the people, ”the statement said, citing Saied.

The president has pledged to make changes to the constitution through a committee of experts appointed by the presidency.

The next day, member states of the G7 group issued a statement reiterating their previous position to urge Tunisia to announce a “clear timetable” and a swift return to functioning democratic institutions “with an elected parliament playing an important role”.

The statement came as a reminder of international pressure on Saied and Tunisia’s deep economic crisis, as much-needed loans and financial aid remain contingent on Western support, which it does not have.

“However, four months after taking power, none of these countries have offered the billions of dollars Tunisians need to get through the winter,” he said. “So far, their support is moral, not physical.”

Its roadmap was, however, welcomed by the European Union, which described the election calendar as “an important step towards restoring institutional stability and balance”.

Domestically, Saied is politically isolated despite his popularity, having vilified the entire Tunisian political class, including the million-strong UGTT, which initially supported his decision to freeze parliament.

On December 17, the anniversary of the 2010 Tunisian uprising, hundreds of people protested against Saied’s road map in Habib Bourguiba Avenue in central Tunis, as a smaller counter-demonstration was held in proximity. Protesters said police prevented thousands from joining the protest, which called on the president to step down. The Citizens against the Coup d’état (CAC) initiative organized a small sit-in, which was sealed off by the security forces.

Jouhar Ben Mubarak, constitutional law expert and head of the CAC, said the roadmap is designed to “perpetuate” the political crisis. Noureddine Taboubi, secretary general of the UGTT, declared that the electoral calendar does not respond to the economic and social problems of the country.

“Saied will not be able to maintain his popular base of support forever,” said Wolf of the University of Oxford. “On the contrary, the current political crisis will only make matters worse, making its political future dependent on the support it receives from the military,” Wolf said.

* A print version of this article appears in the December 23, 2021 edition of Al-Ahram Weekly