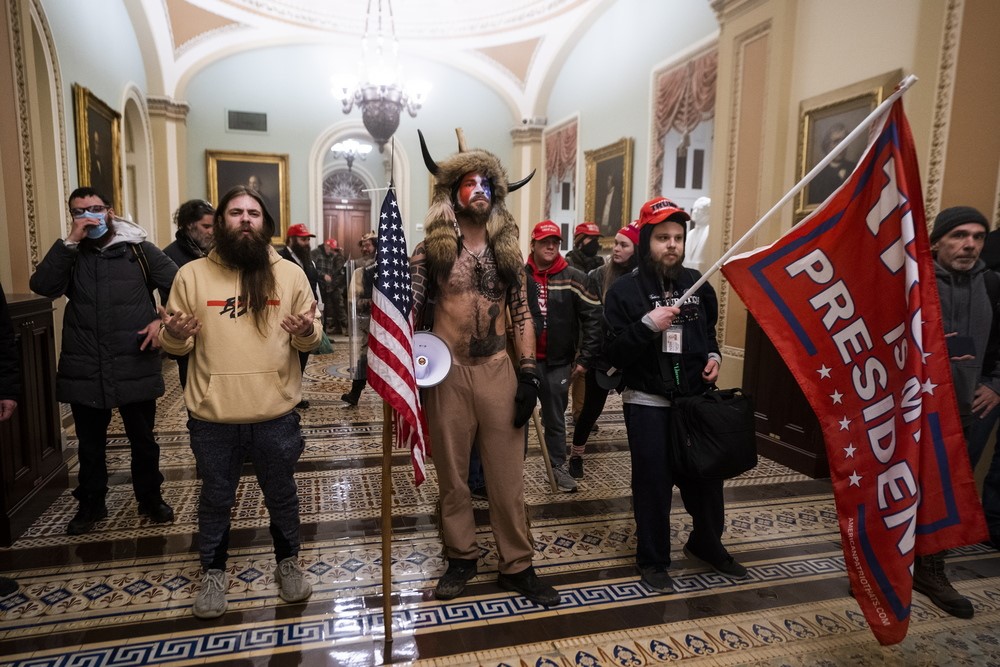 The COVID-19 pandemic, the invasion of the Capitol by supporters of then-incumbent US President Donald Trump, the return of the Taliban to power and the precipitous withdrawal of the Americans from Afghanistan, increasingly alarming reports on climate change . Here are the main events of 2021 around the world.

– COVID-19 is still here, a road race for vaccination –

Despite hopes of developing COVID-19 vaccines, the pandemic caused more deaths worldwide in 2021 (3.3 million at the end of November), increasing the official death toll – which is vastly underestimated, according to the ‘World Health Organization (WHO) – to more than 5 million, mainly due to the most contagious Delta strain of the novel coronavirus. Despite the dispatch of experts by the WHO to China, the origin of the new coronavirus has still not been traced.

The twenty vaccines approved by men and women around the world have made it possible to administer more than 7.8 billion doses, with obvious inequalities of access between poor and rich countries, and not without resistance from the vaccinators.

The borders have been partially reopened. The Tokyo Olympics could take place in July, a year late and almost over.

Since the autumn, Europe has been facing a resurgence of the pandemic, causing new restrictions and controversies. Successful clinical trials of COVID-19 drugs have raised new hopes, but have been overshadowed by the emergence of the novel Omicron variant strain of the novel coronavirus, originally found in South Africa and carrying numerous mutations and possibly be very contagious.

– Scenes of chaos at the Capitol –

On January 6, 2021, hundreds of supporters of incumbent President Donald Trump stormed the United States Capitol, trying to prevent its members from ratifying Democrat Joe Biden’s victory in the November presidential election. The scenes of chaos that follow create a sensation around the world.

Five people were killed during or shortly after the attack, including a policeman and a protester, who were shot dead by a Capitol guard.

Joe Biden was sworn in on January 20, with his predecessor not attending the swearing-in ceremony because he refused to admit defeat.

Accused by the House of Representatives of “incitement to insurgency” in the attack on the Capitol, Donald Trump was acquitted by the Senate in February after a second referral.

On January 17, opposition and anti-corruption activist Alexei Navalny was arrested on his return to Russia after recovering for five months in Germany after being poisoned, which he blamed on Russian President Vladimir Putin and his secret Service.

In February, Alexei Navalny, the target of several lawsuits, was sentenced to two and a half years in prison for a 2014 fraud case he claims to be politically motivated.

Its organizations, qualified as “extremists” by the courts, appeared on the list of organizations banned in Russia in August.

– Coups d’Etat and show of force –

On February 1 in Myanmar, the military arrested the head of the political government, Aung San Suu Kyi, who was placed under house arrest, ending a ten-year democratic hiatus after nearly half a century of rule. military.

The coup led to violent repression: more than 1,100 civilians were killed and thousands of dissidents were imprisoned.

Aung San Suu Kyi has been the subject of numerous persecutions and faces up to decades in prison.

In Chad, General Mahamat Debbie was proclaimed Head of State by the army on April 20, the day after the death of his father, General Idris Debbie Atno, who succumbed to his wounds in combat after 30 years in power.

A second military coup in 24 months took place in Mali on May 10, establishing Col. Asimi Goita as interim president.

In Guinea, President Alfa Conte was overthrown on September 5 by a military coup.

In Sudan, an agreement reinstates Prime Minister Abdullah Hamdok as prime minister on November 21, while strengthening military control following the October 25 military coup. Protests against the military continue as the country began its transition to political power following the overthrow of dictator Omar al-Bashir in 2019. Dozens of people have been killed since the crackdown.

– War between Hamas and Israel –

On May 3, clashes erupted in occupied East Jerusalem, on the sidelines of a demonstration in support of Palestinian families threatened with eviction in favor of Israeli settlers. Clashes then erupted between Palestinians and Israeli forces in Mosque Square, as well as in the occupied West Bank.

Britain, which left the European single market on January 1, faces a labor shortage, mainly in the road transport sector, which has deteriorated since June, leading to shortages in supermarkets, pubs or distribution of fuel. Brexit is also creating tensions in Northern Ireland, as well as between Britain and its neighbors, notably France, over fishing or migrants.

In Germany, Chancellor Angela Merkel is stepping down after 16 years in power. His departure raises fears of a vacuum within the EU. Olaf Soltz, leader of the Social Democrats electoral list, is allied with the Greens and the Liberal Democrats and will succeed him before Christmas.

Europeans see it as an unprecedented attack on the rule of EU law.

Continued global warming above the desired level of 1.5 degrees Celsius, set by the Paris Climate Agreement, would “have irreversible effects on human and ecological systems,” warn UN experts in a draft report. the climate, a copy of which was obtained by AFP in June.

Extreme climatic conditions are on the increase: at the end of June, a “heat dome” kills dozens of people in Canada (up to 49.6 degrees Celsius) and in the American West.

Germany and Belgium were hit by catastrophic floods (over 200 dead, billions in damage) in July, the hottest month on Earth on record, according to the US Science Service.

Madagascar is experiencing for the first time a famine due, according to the UN, to climate change.

In November, the United Nations International Conference on Climate Change COP26 adopts an agreement to accelerate the fight against climate change. However, the “Glasgow Pact” does not guarantee that the goals of the Paris Agreement are met and does not respond to the demands of the poor.

– Lightning victory of the Taliban –

On August 15, the Taliban invaded Kabul without resistance, following a thunderbolt that began in May, taking advantage of the start of the withdrawal of US and NATO forces from Afghanistan, twenty years after their ouster. by an international coalition under the United States.

A giant flyover is set up in Kabul to evacuate thousands of Americans and Afghans who had worked with the United States.

On the 31st, the day after the last American troops left, US President Joe Biden defended his decision to end the longest American war, despite strong criticism of the evacuation operations.

The suffering country faces a security crisis due to the activity of jihadist organizations, including bloody attacks by the Islamic State – Khorasan (EI-K).

Faced with the specter of a humanitarian tragedy, the international community is wondering what position it should take vis-à-vis the Taliban government, especially since they are not committed, in particular to respect for the rights of women and minorities.

On October 14, Hezbollah took its supporters and those of its allied movement Amal to the streets of the Lebanese capital to demand the replacement of the judge responsible for investigating the 2020 explosion in the port of Beirut (more than 210 dead ). , who wants to interview senior officials.

The demonstrators opened fire, triggering violent incidents in which seven people, mostly members of two Shiite groups, were killed and rekindled the specter of civil war (7-1975). Hezbollah and Amal blamed the snipers for the Christian party of Lebanese forces, which denies the allegations.

These violent incidents add to the serious political, economic and social crisis in which Lebanon is plunged, where the political order is accused of corruption and incompetence.

– Immigration crisis at the Belarus-Poland border –

In November, thousands of migrants, mostly from the Middle East, camped in low temperatures along the Polish border on the Belarusian side, hoping to enter the EU.

The West accuses Minsk of having orchestrated this series since the summer in response to Western sanctions imposed on Belarus following the suppression in 2020 of a historic opposition movement. Belarus and Russia, who deny being at the origin of the crisis, criticized the EU for not accepting these people.

At least 12 migrants are killed on both sides of the border, aid organizations say.

– Space, a new frontier for billionaires –

The year 2021 marks a turning point for space tourism.

In July, Richard Branson travels through space in a vehicle from his own company, Virgin Galactic, and then Jeff Bezos participates in Blue Origin’s first manned flight, which carries William Sutner, Kirk’s governor, in October. Star Trek “.

On the state side, NASA’s Perseverance robotic spacecraft lands on Mars in February.

In May, China lands a small remote-controlled robot on the Red Planet. The Chinese have also been building their own space station since June.