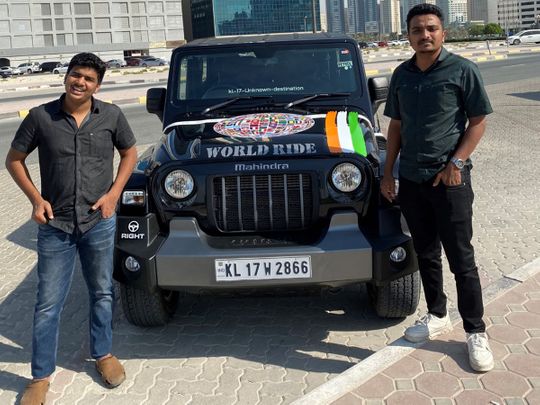 Mohammed Hafiz, 19, and Hijas KI, 22, are currently exploring the United Arab Emirates in their newly purchased Mahindra Thar four-seater 4×4 vehicle for which they have taken Carnet De Passage (CPD). The CPD is an international customs document that covers permits for temporary entry of motor vehicles into different countries.

Talk to Gulf News from Sharjah, where they were driving on Monday, the young people said they wanted to see the world and different cultures through their travels. “We are distant relatives,” Hafiz said. “Our two fathers [Backer and Iqbal] were truck drivers in the United Arab Emirates. We owe a lot to this country which has given everything to our families. Therefore, we have chosen the United Arab Emirates as our first destination, ”he said.

The duo placed images of the flags of various countries they will be visiting, as well as a large image of His Highness Sheikh Mohammed bin Rashid Al Maktoum, Vice President and Prime Minister of the United Arab Emirates and Ruler of Dubai, on their SUV.

From Kerala to Africa

Hijas said his goal was to cover nearly 50 countries, mostly in Asia and Africa, in one year. “We planned this as a trip from Kerala to Africa. We want to prove that it is possible in a vehicle made in India, ”he said.

However, the duo have a clear idea of ​​their destinations. “We have taken UAE residence visa because it will help us get visa on arrival in many countries,” Hijas said.

A graduate in electronics and electrical engineering, Hafiz said he was inspired to take such a trip when he visited the UAE in March 2021.

“I have already completed a ride all over India from Kerala to Kashmir in another SUV. It gave me the confidence to undertake this trip,” said Hafiz.

Ready to quench the urge to travel

The duo, who run a plastics trading store in Kerala, said they took profits from the store and additional loans to cover travel expenses and were also looking for supporters in the countries they were visiting.

After exploring six of the seven emirates since arriving in Dubai, the young people said they were warmly welcomed by Indian expats, especially those from their home country.

“We have friends, relatives and supporters here. But, when we go to other countries, we will be alone. We expect the same warmth from people in other countries too. Once we are outside the United Arab Emirates, we will mainly sleep inside our vehicle only. We set up beds like in a mini ambulance, ”Hafiz said.

They said they were vaccinated and hoped the current spread of the Omicron variant of COVID-19 would not pose a threat to their route. “We urge Indian missions in all the countries we visit, to support us with travel authorizations,” Hijas added.

Young travelers hungry for travel are expected to leave for Oman on December 27.

2021-12-22
Previous Post: Defenders pressure UK to recover anchor from historic liner
Next Post: The market for KSA Fitness is set to gain ground with the increase in the number of fitness clubs incorporating state-of-the-art equipment responding to changing health habits and consumer demands: Ken Research