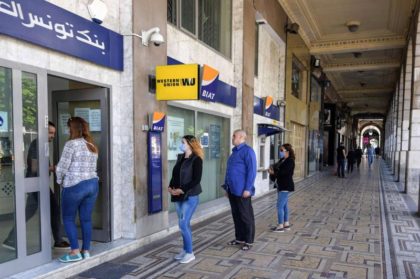 The Tunisian government is putting increasing pressure on local financial institutions to fund the 2022 national budget as the country struggles to secure foreign loans to fill the project’s $2.8 billion budget shortfall.

“There is a lot of pressure on managers of financial institutions to fund the state,” El Karm said in a Facebook post.

The Tunisian government last month passed a 2022 national budget of around TD 47.166 billion (about $16.4 billion), including a deficit of $2.8 billion.
The State’s contribution to the budget is 38.6 billion DT.

The North African country is facing economic stress due to the pandemic which has affected the economy. The state turned to friendly foreign countries to help fund the budget, but only Algeria answered the call with $300 million in the form of a loan.

Saudi Arabia has also agreed to back the budget with $500 million, but on the condition that Tunisia meets International Monetary Fund (IMF) requirements for a restructuring plan.

The North African country has been hesitant to take out a line of credit from the Washington-based institution, but talks have taken place between the two parties and an agreement is expected by the end of the first quarter of this year. year.

North Africa Post’s news desk is staffed by reporters and editors, who are constantly working to deliver fresh and accurate stories to NAP readers.