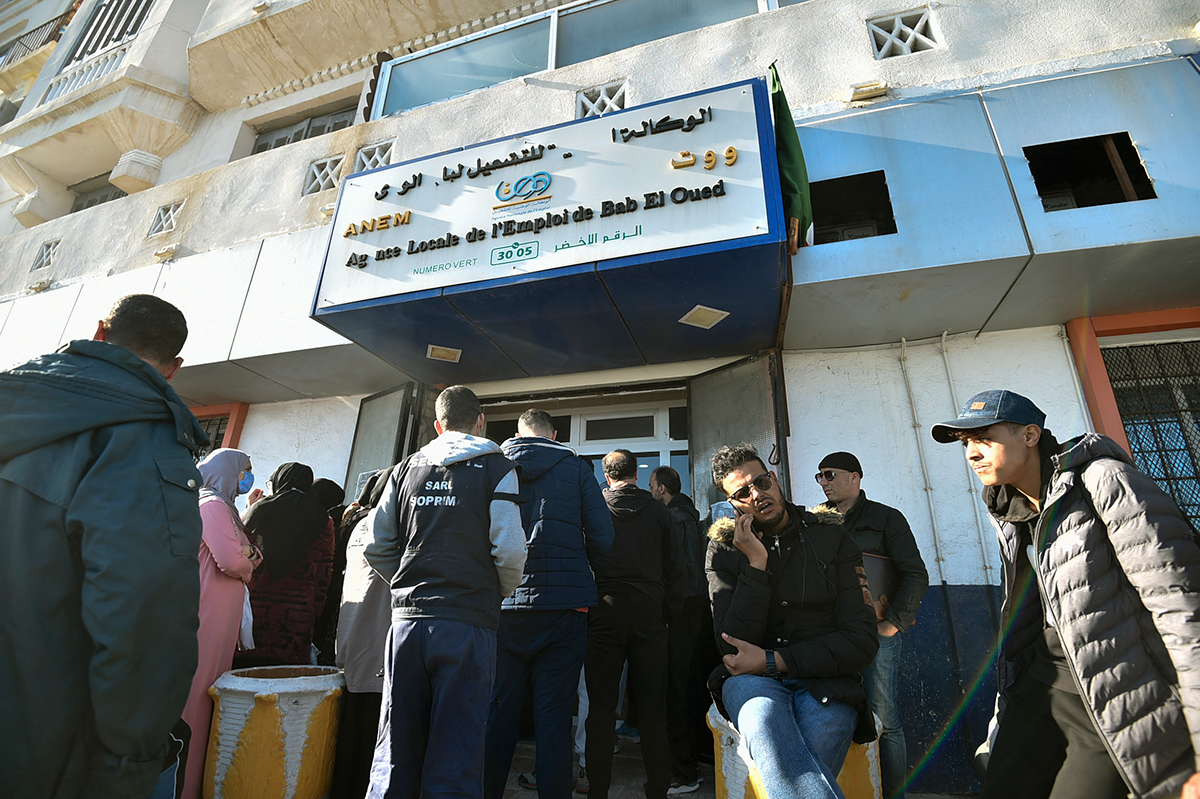 Understanding Algerian unemployment policies beyond the redistribution of rents

In February 2022, Algerian President Abdelmadjid Tebboune announced a new unemployment benefit for first-time job seekers between the ages of 19 and 40. On March 28, 580,000 young Algerians received their first monthly payment of $90.

While many young people rushed to the offices of the National Employment Agency (ANEM) to register for the new allowance, potential problems have already arisen. On the one hand, how can the government ensure that workers in the informal market, which is the main employer of young people, do not commit fraud by declaring that they are unemployed? Will the policy really allow beneficiaries to “meet their basic needs”, as the government puts it, given the current inflation rate of 7.7%? More generally, how financially viable is the new scheme, given that applicants who do not find a new job can still expect to receive benefits for two years? Given that only one member of a married couple can benefit from it, will unemployment among women, already lower than among men, go down further? Above all, how egalitarian is this new benefit scheme? First-time job seekers have not contributed to any pension scheme, the average salary in the private sector is $180 per month and this excludes young graduates who have benefited from subsidized short-term internships before but who are still unemployed.

As crucial as these questions are, they have been obscured by the broader perception that the main objective of Algerian (unemployment) policies is to buy social peace. With Russia’s war on Ukraine causing oil prices to soar and the government’s violent crackdown on Hirak protest movement, some even bet that the Algerian regime could show resilience for years to come.

But these interpretations are ill-founded and lack a serious empirical and sociological understanding of the experience of young unemployed Algerians, which is essential to make up for the lack of official data. Such a vision not only prevents the analysis of the effects of these policies on the Algerian economy and the precise measurement of the decline in the standard of living, but also does not say much about the logic of subsidizing the young unemployed mainly as “unemployed” in an already precarious job. market. Moreover, these policies do not engender political support for the current leaders. Rather, they result in young people becoming frustrated with being assigned ineffective welfare and welfare policies, while the real redistribution of rents benefits those who circumvent official state guidelines.

A recent study that I conducted on Algerian subsidized policies regarding unemployed graduates and entrepreneurs allowed me to shed light on the reasons why young people accept these restrictions. Just because they agree with the so-called rentier governance model, which they often don’t fully understand, and won’t consider any other option but to be financially dependent on the ‘State. Rather, they believe that the state owes them compensation for failing to create a functioning labor market. Algerian youth have the deep feeling that in the absence of real forms of social protection and in a context of unequal economic opportunities, the State must intervene to support their entry into the labor market.

Recognizing that the state fully controls the market is different from being content with how it manages the country’s resources. Understanding young Algerians’ sense of being professionally constrained by the Algerian rentier model, rather than being willing participants in forms of social contract that merely subordinate them, may explain why social unrest has persisted despite 25 years of youth employment policies.

The issues of state compensation for young unemployed workers are complex and illustrate the limits of the rentier social contract thesis. For example, the authorities have refused to officially recognize and, in fact, have violently repressed, the various labor unions that the young beneficiaries of ANEM programs have tried to create since 2011. Among them, the National Committee for the Pre- Net employment and social security, whose members have regularly protested against their accumulation of contracts for the integration of short-term unemployed people (sometimes for more than 10 years) which have not resulted in permanency as promised. Demonstrations of the “unemployed from the south” (southern unemployed) have also been recurrent since the early 2000s and organized with others within the National Committee for the Defense of the Rights of the Unemployed (CNDDC) since 2011 who believe that they must have priority access to employment, because the pension national, in the form of oil, is extracted from “their land”. In July 2021, these protests were met with widespread violence across southern Algeria. Although some government concessions were accepted aimed at ending the protests, such as placements in public administration and loans to small businesses, frustrations remained.

Algerian authorities have consistently increased investments and loans in an effort to dissipate social tensions (such as the Arab Spring in 2011 and the Hirak in 2019) and threats to their own privileges emanating from changes in governance (such as the re-election of the president Abdelaziz Bouteflika in 2004 and 2008, Tebboune’s presidential campaign in 2019 and internal military conflicts in 2020-21). Young people, however, believe that personal relationships play the biggest role in determining the outcome of their “sponsored” work experience. They are convinced that receiving an allowance, as a young unemployed person, is a compulsory step in order to enter the official labor market. In my interviews, most said that without ma’aref (“networks and connections”), they would not have been able or will not be able to become civil servants or succeed in creating a business. Those who have more social and economic capital explain that it is, for example, thanks to a relative or a friend already working in the administration that they were able to access and succeed in (so-called) open competitions for tenure. Others indicated that their ability to build a network of customers and suppliers, or to inherit these contacts from family members already in the field, enabled them to escape bureaucracy and make their business sustainable.

In the long term, corruption and clientelism are clearly perceived as limiting the potential of young people instead of promoting their professional integration. This has been particularly noted by people placed in public administration (especially in municipalities) who have been victims of various forms of harassment, including but not limited to sexual and psychological harassment, or corruption , such as a request for help in filling the ballot boxes during an election. election, to facilitate their professional integration. They often refrain from joining self-employed unions because they believe it could cost them their jobs.

Government subsidies are seen by young unemployed people as a duty of the state. They feel that he should allocate them their share of the national rent, but that still does not guarantee their political loyalty or assuage their grievances.

Recurring political promises to revive the economy by nurturing a new generation of young entrepreneurs are undermined by bureaucratic hurdles, lack of private sector reform, inadequate wages and inflation. These policies, seen by both the state and claimants as short-term solutions to buy time, do not provide a sustainable framework through which a new long-term social contract can be negotiated.

Amel Boubekeur is a sociologist at the Ecole des Hautes Etudes en Sciences Sociales (EHESS) and a non-resident researcher in the North Africa and Sahel program of the MEI. The opinions expressed in this article are his own.